Start a Wiki
Have you ever wondered how it feels like to fight with Stretchy Mechanical arms without your arms being chopped off? WELL, NOW YOU CAN! 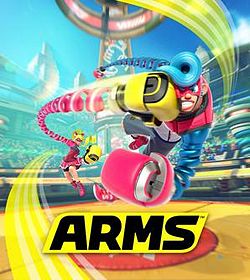 Arms is an upcoming fighting video game developed and published by Nintendo for the Nintendo Switch, which is set for release worldwide in June 2017. The game differentiates itself from the standard fighting game, as up to four players can choose a fighter and battle using a variety of extendable arms to knock out opponents in a three-dimensional arena.

I, The founder of the wiki Co-ordinatly invite you to at least help out in the wiki. There are over 8 Characters to play as, Over 10 Weapons to unlock and 1 jar of craziness!

It will be out on June 16th so really, I cannot wait for the Silly-ness to happen!

Up to four players can control one of a variety of fighters, with the player able to perform basic fighting actions using extendable arms such as punching, throwing, blocking, and dodging. Each character has a different set of abilities and unique gloves for different strategies. Players are also able to customize their arm loadouts, with each arm being able to be selected independently. Every arm is different with elemental attributes and varying weights that affect gameplay. A 2v2 game mode also exists.

So come along and contribute on theARMS Wiki now!

Retrieved from "https://community.fandom.com/wiki/User_blog:Zambiealex/ARMS_Wiki?oldid=2206266"
Community content is available under CC-BY-SA unless otherwise noted.