We usually come together to share and celebrate what we know and love about our favorite subjects, but today the topic is a bit more serious. Wikia’s foundational philosophy celebrates openness and transparency, based on the notion that knowledge is something that should be shared through collaboration. Our communities would not be possible without a free and open internet, but we still value the privacy of our users.

An issue that dominated in 2013 was the revelation of the mass surveillance and bulk data collection covertly conducted by the National Security Agency. The disclosures were unprecedented, and the full extent of these surveillance activities is still an open question. At the very least it is a certainty that the United States government keeps records about online and other electronic activities. Supporters of this process argue that electronic surveillance is necessary to protect the United States and the world from international terrorism. Opponents argue that it is an unnecessary encroachment on individual rights both in the United States and abroad, and that the process is shrouded in secrecy and lacking meaningful oversight.

While serious debate has emerged regarding the need to balance real security concerns against the value of protecting civil liberties, both sides can agree that public trust needs to be restored for these intelligence-gathering programs. Two attempts at reform are the FISA Improvements Act and the USA Freedom Act. These laws both push for changes to the way the Foreign Intelligence Surveillance Act of 1978 (FISA) operates as an oversight for the NSA’s data collection, although they take radically different approaches. 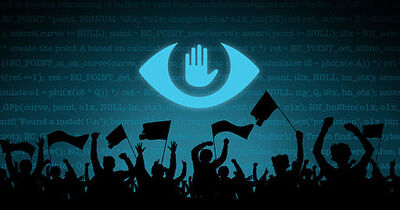 Many of the same groups and online communities who protested against the Stop Online Piracy Act (SOPA) and PROTECT IP Act (PIPA) in 2012 are joining together in a digital protest called “The Day We Fight Back.”

This concerted effort will take the form of a webpage banner-advertisement that calls on viewers to contact their local representatives and urge them to oppose the FISA Improvements Act and support the USA Freedom Act, which digital privacy advocates argue provides more meaningful reform to the intelligence program. Although it deals with these proposed U.S. laws specifically, the central idea underlying this protest is to raise awareness of mass surveillance and ask online communities and citizens how these issues affect them.

Wikia wants to hear what you and your community think. Is this an important matter to you? Do you and your community want to participate in this campaign to protest mass surveillance? We have a poll at the bottom of this blog, and we would like to ask that you vote to show your decision. If you tell us that this issue is important to you, Wikia will join the dozens of other tech companies taking a stand through The Day We Fight Back campaign. While this is in many ways a U.S.-focused issue, we also encourage all governments to temper their national security needs with transparency, and users outside the United States can participate by calling for their own governments to strengthen privacy protections. We’ll stand with you and provide ways for your community to join in the conversation through Wikia and social media.


Would you like insights on wiki building and usability?
Read through our Best Practices guides for keeping your community growing and healthy.
Want to get real-time access to fellow editors and staff?
Join our Official Discord server for registered editors!
Retrieved from "https://community.fandom.com/wiki/User_blog:Semanticdrifter/Digital_Protest_Against_the_FISA_Improvements_Act?oldid=1195175"
Community content is available under CC-BY-SA unless otherwise noted.