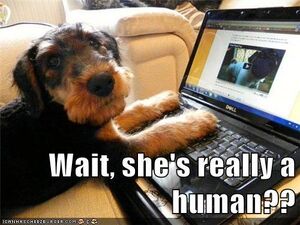 There's a classic New Yorker comic, with a dog sitting at a computer and saying to another "on the Internet, nobody knows you're a dog". It's become a classic Internet meme, and that's because the message it gives is so very true: on the Internet you never know who (or what) is on the other side of the screen.

Despite this, we manage to create real and meaningful relationships with Internet friends. We know all sorts of things about them, and care for them just as much as friends we see offline. But there is a real danger in all this. People sometimes lie, and sometimes those lies are clever, convincing and very dangerous.

Recently, there was a story in the news about a football player, Manti Te'o, and his girlfriend. The original story everyone heard was that his girlfriend had tragically died of leukemia. But some clever investigative journalism showed that the girlfriend never existed! This is where it gets confusing. It's possible that the football player had created himself a fantasy girlfriend, fooling his family, friends, and fans. But he says that the two of them had only ever met online, and that he was the unfortunate victim of a cruel online hoax. Someone, somehow, fooled him into getting close to a persona that was completely made up.

It seems impossible that someone could be fooled so completely that he believed in an imaginary girlfriend, and in her illness and eventual death. But I know from experience how convincing someone can be online, and how easy it is to build a friendship with a persona that turns out to be as completely fake. Ultimately, it's not possible to know with 100% certainty if the person you are talking to online is really the person they say they are.

Of course, that's not going to stop us starting and developing friendships online, doing that is part of what's great about the Internet. We build friendships, we work together to grow our wikis, and we share our trials and triumphs. So the question is, how can you keep yourself safe from those that might be deceiving you, while still enjoying the friendships the Internet can bring?

The most important thing you can do, is to be aware. Most people you meet online will be genuine, but always be aware of the possibility that they might be fooling you. Even if you feel close to them, and are sure they care about you, you should still remember that you only know the version of themselves they choose to show online. So remember the possibility that someone may be trying to fool you, and if they are acting in a way that seems wrong or out of character, you can be ready to back off and spend your time elsewhere.

Another important thing is to protect your privacy. Giving out personal information can be dangerous. It might result in an annoyance like someone signing you up for a mailing list, or it could be someone signing up for a credit card in your name instead. And, although it's very rare, it could lead to real danger from someone who has worked out your actual location. But if you are careful about giving out personal information, then there's limited harm that anyone can do. It's important to remember that you can choose what information you give out. Even if you are asked questions by someone you feel close to, it's always OK to say "I don't want to share that", or "I prefer to use my nickname, not my legal name". Never feel obliged to share anything with, or even talk to, someone who makes you feel uncomfortable.

Although identity theft or online predators are probably the most dangerous risks we face online, they aren't the most common. What's much more likely to happen is someone using what's said in private to cause embarrassment in public. They might be doing this because they think it's funny, or they might be angry after a falling out, or they might not realize how damaging it can be. But either way, it can be easy for a malicious person to cause you harm by making private things public.

If you have a private conversation with someone online, then there is always the possibility that they will pass that onto others, or copy it to somewhere public. And if that conversation contains personal information, or private thoughts, that can be very hurtful and even harmful. With the Internet so widely used, that "interesting" photo you shared with a person you thought was your friend, could soon be on the screen of a potential employer. Or worse, on your mother's iPad!

So the safest thing is to act well. What that means, is don't do or say things online, even in private spaces, that would be embarrassing or harmful to you if they were to be made public. I've seen way too many screenshots of private chat conversations to ever think that they are actually private. But if you are careful and act as if your conversation were public, then people can't hurt you that way.

So remember: be aware, protect your privacy, and act well. And then even if the person on the other side of the screen does turn out to be a dog you will have kept yourself safe.


Would you like insights on wiki building and usability?
Read through our Best Practices guides for keeping your community growing and healthy.
Want to get real-time access to fellow editors and staff?
Join our Official Discord server for registered editors!
Retrieved from "https://community.fandom.com/wiki/User_blog:Sannse/On_the_Internet,_Nobody_Knows_You%27re_a_Dog?oldid=970202"
Community content is available under CC-BY-SA unless otherwise noted.