Note: This series of blogs has been duplicated over on the I Love Writing Wiki. Any updates and corrections will made there and commenting on the blogs is still active so feedback and other comments can be left. 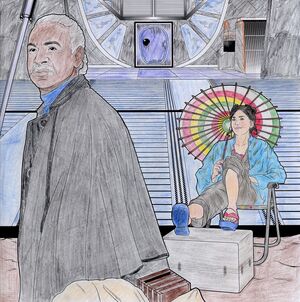 How do you like my adaptation? I know, it's not very good. I couldn't get Kaylee's or Shepherd Book's skin quite right, I didn't have metallic color pencils to do Serenity's cargo area in the background properly, and Book's cloak was actually black instead the light gray I used.

Maybe I should try again.

How about my other adaptation? That's my Perry the Platypus Piggy Bank. I made it based off the show Phineas and Ferb. It's actually the second one I made. One of my co-workers bought the first one for her grandson. Someday, I'd like to make more and see if I can send them to the show's creators as a gift.

You might be wondering why I am calling a page from a coloring book and a hand-made toy adaptations. That's because they are. The first picture is a triple adapation and the second is a sextuple adapation, and that's not even counting the adapations of the first time they were filmed for their shows and the pictures I took of both of them at the end of the process.

Here's what I mean.

In the pilot episode of Firefly, the crew needs to raise money so they take on some passengers that want to travel to another planet. The scene in the TV show is different than what's on that coloring page. When Shepherd Book is standing in that position, the camera is behind him. When Kaylee gets his attention, he turns to face her, and that's when the camera is in the position we see in the coloring book page. So that's the first adaptation: a slightly different arrangement of people and objects. The second adapation is the conversion of that scene into line art so it can be put into a coloring book, and the third is when I colored it.

For the piggy bank, the episode "Toy to the World" in Phineas and Ferb showed the step-brothers creating a toy based on their pet platypus (adapation #1). They present it to a toy company and it's approved for immediate manufacture (adapation #2). Marketing materials were created based on the toy (adapation #3). I printed out a screenshot from the episode and took measurements of it, then came up with plans for a scale model (adaptation #4). I modified it to also be a piggy bank (adapation #5). And if you'll look at the picture, you can see Kelly Hu's and Olivia Olson's signatures on it. The other side that's not visible has Greg Guler's signature, character designer for the show. So adapation #6 is the fact that this toy also doubles as a kind of autograph book.

If I were to go back and color in another copy of that coloring book page, it would be yet another adapation. Even if I were to use the same colors in all the same places, I wouldn't be able to duplicate the exact same pencil marks. The colors would be darker or lighter or the strokes would be at a different angle. Likewise, the next time I make one of the piggy banks, the criss-crossed lines on Perry's tail will be different because I would try to get them to line up better at the edges.

As you can see, I have a different viewpoint on these two items than most people would. This is a result of my own attitude changing over the last couple of years when it comes to fan fiction. For me, fan fiction has often been synonymous with vandalism due to the number of times where it's shoved in with the factual information or has been put on so many wikis that it becomes spam.

What I've realized is that when fan fiction is presented like that, it still is a problem that needs to be cleaned up. But there is also value in fan fiction because it represents imagination and creativity, the same two aspects that are the heart of all the things around us and so I try to help people find more appropriate places for it.

You're reading this on the main Fandom wiki, just one of the thousands of wikis created in the past decade. All of these adapted the idea found in Wikipedia where the general public can contribute their knowledge about a subject. But instead of trying to maintain an encyclopedia format with a neutral point of view, individual wikis can cover as many topics they want in however much detail and in whatever style they want.

My purpose in writing this series of blogs is to encourage you to see fan fiction in a new light. Help people develop it so that its creativity, imagination and inspiration can be adapted yet again into new forms wherever they go.

That kind of encouragement can lead people in directions they weren't expecting. For an artist named Ashley Simpson, it led her to a job at Disney Television Animation.

She was a fan of Phineas and Ferb, and to show how much she appreciated it, she met series co-creator Dan Povenmire at a convention and gave him a drawing of the two boys as teenagers. A couple of years later when work began on an episode that would take place ten years in the future, Dan was talking with Jeff "Swampy" Marsh and remembered her. He realized Ashley had already done some of the work in adapting the characters into teenagers, which you can see an example of in this picture, and wanted to talk with her about hiring her.

It took a bit of effort, including having to convince her it wasn't some kind of joke, but yes, she did get hired and received a credit as Character Designer on the episode "Act Your Age". This was covered in the Act Your Age Featurette. She continues to work with them as a Character Designer on their new show, Milo Murphy's Law, which isn't exactly a spin-off of P&F, but crosses over with it in several ways.

As Ashley says, "It just feels magical when you have a dream that you're just striving for. It's a lot of work, but once you're done and you see your project on television or on the web, it's the best feeling in the world."

Retrieved from "https://community.fandom.com/wiki/User_blog:RRabbit42/Embrace,_don%27t_chase:_Everything_is_adaptation?oldid=2996670"
Community content is available under CC-BY-SA unless otherwise noted.