As announced in the latest Unified Community Platform blog (a very long, but informative read!), we will be rolling out a new Wiki Creation process for Fandom when the UCP goes live. In this post, I’d like to talk to you about the process, the thinking behind it, address some likely questions, and then take questions I haven’t thought of yet.

Creating a Wiki on the UCP

Right now, the Wiki Creation process on Fandom is very simple. You give a name, you pick a URL, you answer some questions about your topic, and pick a theme. Your wiki is ready to start editing!

Starting with the launch of the UCP, this process will have a conditional aspect for wiki creations which appear to overlap with existing communities. If our system determines that your topic may be covered by an existing wiki, you will be presented with up to 3 existing wikis which you may be overlapping. This is to make you aware that those wikis already exist on our platform and, should you have not realized that, encourage you to join one of them instead of creating a competing wiki. While that is the main use case for overlapping wiki creation prevention, there is another one: bad faith users making competing wikis intentionally.

The existence of similar wikis does not, however, prevent you from creating a new wiki. There are exceptions and there are cases where our recommendations might be wrong, both of which we have planned for. After confirming you’ve seen the possible overlaps, you will be given the option to select options which describe your planned wiki and why it should be allowed as an exception: 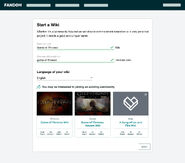 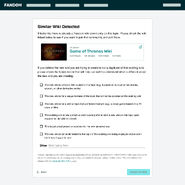 When the system detects a potential overlap and you select the option that describes why your wiki should be allowed, we allow you to create your new wiki, but it will be flagged for a staff review that will be conducted within 5 business days. If it is determined that the reason you gave for the exception does not apply, your wiki will be closed.

Why are we doing this?

Do you know the number of Minecraft wikis there have been on Fandom? Let me put it this way… 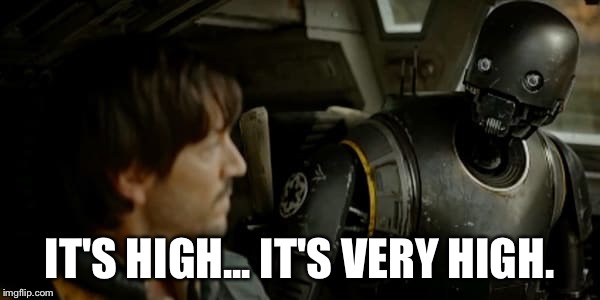 There have been more Minecraft wikis on Fandom than there are Gamepedia wikis overall. A decent portion of them are related to mods and servers, but a lot of them are general Minecraft information. That is a lot of internal competition before you even factor in Gamepedia and its network of connected Minecraft wikis.

A lot of that competition is unintentional, caused by users who did not realize that a Minecraft wiki already exists. This system will help to let users know that the wiki they want to create may already exist and encourage them to join said wiki instead of creating a potential competitor. Of course, the overlapping wiki’s results will be ignored by some, just as the big Minecraft wiki banner on Gamepedia.com has been ignored by countless users over the years who then sent me suggestions to create a Minecraft wiki. That’s where the staff review of flagged overlaps will come into play.

On Fandom, there is a phenomenon which sometimes occurs after a user is blocked on a wiki. Whether or not the block was justified, they feel that their need to create wiki content on that topic is more important than the health of the existing community from which they were blocked and, thus, they create a copycat wiki. Whether it’s just that they want to talk about the topic or they want to hurt the wiki which blocked them, such intentional competition is not acceptable and this new wiki creation process makes our stance on such wikis very clear: their creation is no longer welcome on Fandom.

Why are competing wikis bad?

Where there are multiple communities on the same topic, they compete for editors and readers and create duplicate content, which can lead to tension within the fan base and lower search engine rankings for both wikis, which makes it harder for people to discover the very best content - yours! When fans are united and working together, they create the best resources and form the strongest communities.

The Unified Community Platform’s first release is a moment in time ideal for such a change. We are moving into a modern era of fan-focused wiki content with a fresh technology upgrade that brings a lot of benefits to existing users and provides great opportunities for a new generation of editors to dive in. Encouraging folks to dive into existing communities, rather than maybe unintentionally competing on the same topic, is the best policy for this brave new world.

“What about users who were blocked by bad admins? Are they locked out of that topic forever now?”

Bad faith administration is something we can and will do more to curtail. We recognize that the long-time policy of admins being able to block any user for any reason or for no reason at all is not compatible with this new wiki creation policy and we are exploring policy revisions to address that.

“Does this apply to existing wikis which overlap?”

Not directly. Project Crossover is already working with overlapping wikis to consolidate community efforts for Search Engine Optimization and editor population benefits. Additionally, some overlaps might be resolved if an overlapping wiki becomes a candidate for deletion.

All this is to say that we’re being very strategic about existing overlaps, such as our work with Project Crossover to encourage overlapping wikis between platforms to combine their efforts and content, and that this policy is not intended to be applied retroactively in a broad sense.

The process for creating a new wiki on Fandom and the policy regarding the creation of duplicate wikis are changing with the release of the Unified Community Platform. The changes focus on encouraging would-be wiki founders to join their fellow editors on an existing community for their topic, should one exist. Ignoring a correctly detected existing wiki will result in the overlapping new wiki being closed by staff. This is being done to make sure that awesome communities aren’t being hurt by competition within the platform, whether intentionally or not.

This policy change is focused on new wiki creation, not existing overlaps.

Will is the Global Community Lead at Fandom. Previously, he was the Community Manager for Gamepedia and the Gaming Community Manager for Imzy. Outside of work, he hangs at the beach, explores breweries, plays golf, and lifts big weights for fun.
View Profile
Want to stay up to date on the latest feature releases and news from Fandom?
Click here to follow the Fandom staff blog.


Would you like insights on wiki building and usability?
Read through our Best Practices guides for keeping your community growing and healthy.
Want to get real-time access to fellow editors and staff?
Join our Official Discord server for registered editors!
Retrieved from "https://community.fandom.com/wiki/User_blog:MisterWoodhouse/Creating_new_wikis_on_the_Unified_Community_Platform?oldid=3015073"
Community content is available under CC-BY-SA unless otherwise noted.