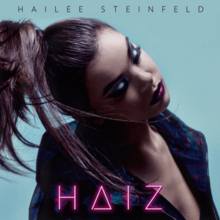 Hi Wikians! I'm I Love Blue 02. I want you to present the Hailee Steinfeld Wiki. It is all about the singer, actress and model Hailee Steinfeld. She is known as Emily Junk in the Pitch Perfect 2 and as Mattie Ross in the 2010 film True Grit. She also played as Juliet in the 2013 version of Romeo & Juliet. After the portrayal as Emily Junk, she released her debut EP called "Haiz". Her lead single from the album was "Love Myself" and the latest single was with Zedd and Grey, the single was titled "Starving". She also had a collaboration with DNCE, it was called Rock Bottom.

The Filmography of Hailee Steinfeld

The Discography of Hailee Steinfeld

Retrieved from "https://community.fandom.com/wiki/User_blog:I_Love_Blue_02/Hailee_Steinfeld_Wiki?oldid=2056649"
Community content is available under CC-BY-SA unless otherwise noted.