September comes to a close with This Month at Fandom, including cool data trends, Editors of the Month, and a summary of important updates you may have missed.

Good day everyone, I am just but a humble editor of several Wikis.

Currently, however, my IP Address is blocked within this Wiki (and I had no choice but to use a VPN prior to this edit). As a temporary alternative, contact me on the Battle of Warships Wiki, and I will try to respond to any questions whenever I can.

Not necessarily useful to my page, but still interesting to add anyway. 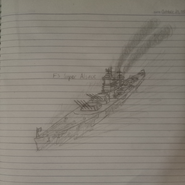 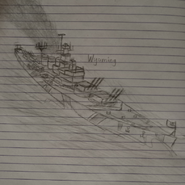 The Super Alsace, as seen in Battle of Warships.

It was 1955, the Concur Alliance forces have arrived into the doorstep of the Union of Communistic Federal States. A large fleet of British, German, Israeli, and Russian warships had already arrived into Prince Edward Island after the fall of Canada. What was left of that country was put under administration of Nunavut and Alaska. The Concur Alliance's next plan was to invade the United Communist States of America.

After hearing of New York, Florida, Kentucky, and Alabama's defection into the Concur Alliance; the said alliance immediately sent convoys to New York and the Carribean to provide a firm foundation for their ambitious plan. Enraged by this treason, the government sent several warships to guard the cost and harass the convoys. The USS Wyoming, a super battleship equipped with twelve 20 inch guns, was sent to bombard New York City. The Concur Alliance, however, sent the Super Alsace, and several cargo ships to New York City in order to prepare for the invasion.

It was 06:00 of March 3, and the convoy was well underway, when suddenly a loud splash broke the silence. A tall column of smoke appeared off of the southern horizon, guns from a massive ship pointed at the convoy. The Super Alsace returned fire, scoring several hits on the Wyoming, setting a large raging fire on board. Seconds later, the Wyoming's monsterous guns roared, propelling a dozen massive shells to the Super Alsace. The salvo destroyed the Super Asace's central and aft superstructure, and also blew off the ship's floatplane.

The raging fire on the Wyoming set off an explosion at an amunition storage on its secondary guns. The explosion blew a large chunk off from the ship. The Super Alsace returned fire, disabling the Wyoming's No.3 turret and dealt damage to the ship's aft engines. The wounded Wyoming sent another salvo of shells at the Super Alsace. This time, however, the shot proved to be devastating. The Super Alsace's aft magazines were hit, and a tall pillar of fire reminiscent to that of a blowtorch erupted at the Alsace's aft magazines, followed by a blindening flash and a colossal fireball that consumed the whole ship. A second explosion at the ship's forward magazine completed the ship's destruction. After the smoke cleared out, nothing was left of the ship. The terrified convoy scattered, and the Wyoming had no choice but to disengage after it suffered major technical issues.