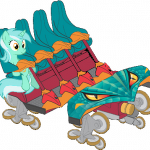 In case you're a̶ ̶s̶t̶a̶l̶k̶e̶r̶ interested in finding out some of my interests and hobbies; read on!

My roller coaster enthusiasm began when I was in my early teens, and reluctantly rode Six Flags Magic Mountain's Revolution. I had ridden smaller coasters before, but Revolution showed me how amazing roller coasters really were. Since the park was dead on that Fall day, I went on to ride every other coaster in the park; all 16! I was addicted, and luckily, that was a time in my life when my family could afford to travel much more frequently. I visited several other parks such as Six Flags Discovery Kingdom, Knott's Berry Farm, Elitch Gardens, Lakeside Amusement Park, and Six Flags Over Texas.

I can't travel that much anymore, and I'm stuck in Arizona, where there are practically no roller coasters! Other than that, it is an awesome state! I have ridden the local roller coaster, Desert Storm over 50 times in the last year, and I can't wait to ride it much more this year!

I'm hoping to one day get into the amusement park industry; specifically in management.

No, I'm not an overly zealous sports fan, but I do enjoy a good, competitive game from time to time. I play Cycle Polo, as well as other sports: Racquetball, Bowling, and Softball. I'd love to play Australian Football more often, but nobody knows much about it here in the United States! :(

I'm also very fascinated with reptiles, and especially lizards such as Monitor Lizards. Maybe someday, I will be a reptile owner!

An unexpected obsession of mine is My Little Pony Friendship is Magic. But don't worry, I'm not really too obsessed... Applejack is best pony!

It turns out that I was the first ordinary Wikia user to use the Wikia chat box! That's my little claim to fame, I suppose!

What does my user name mean?Edit

In case you were wondering, "Montagna Magica" is Italian for "Magic Mountain", my favorite amusement park!

Retrieved from "https://community.fandom.com/wiki/User:MontagnaMagica?oldid=1143394"
Community content is available under CC-BY-SA unless otherwise noted.