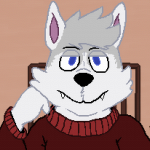 Maybe some of you remember me and others did not, but I was an active user here. I originally created my account in June 2017, but I signed up here only on October 1st of the same year (who is only 17 days before my birthday XD). I initially came here just for talk with random people on the wiki's chat, but after a user sent me a welcome message, I decided to answer it, so I did my first contribution here. But in May 2018, I decided to take a "long break" due to school, family problems and emotional problems occasioned by a troll obsessed with me, who stalked me in many social medias; what caused that I stay inactive here for a few weeks, before I came back and went out again for a long time. I also wrote my "last words" that time, saying that it would be permanently, but I was being uncertainty. Don't worry guys, I'm fine now.

I do not know exactly why I named "Huskley953" as my username, but in September of 2017 I had an idea to create a character, who is a Siberian Husky and is called Huskley. By the way, my character name is a derivate of that blue-eyed dog I already mentioned above and it's because I inspired by my username.

In this section you will show some drawings I've done over of the years. This time I selected the best ones! If you want more of them, check out my File list (by the way, the emojis and stamps were not made by me; I caught them of DeviantArt.

It's a remake of this drawing.
Add a photo to this gallery
Retrieved from "https://community.fandom.com/wiki/User:Huskley953?oldid=2960102"
Community content is available under CC-BY-SA unless otherwise noted.