Quote of the year

We make the internet not suck.
--Jimmy D. Wales 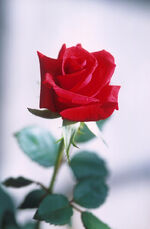 A rose from Jack Phoenix ~

Dariusz Siedlecki, born 3rd November 1988 in Warsaw, Poland, is an active Wikimedian from the beginning of 2005. He used to work for Wikia's development team, joining when Wikia Poland was founded. In March 2007 he started work as part of the community team and then moved on to work as a programmer in July 2007. He's also the spokesperson of the Wikimedia Poland Association.

Go on, have a steak knife!

Imagine that we are designing a restaurant. This restaurant will serve steak. Because we are going to be serving steak, we will have steak knives for the customers. Because the customers will have steak knives, they might stab each other. Therefore, we conclude, we need to put each table into separate metal cages, to prevent the possibility of people stabbing each other.

What would such an approach do to our civil society? What does it do to human kindness, benevolence, and a positive sense of community?

When we reject this design for restaurants, and then when, inevitably, someone does get stabbed in a restaurant (it does happen), do we write long editorials to the papers complaining that “The steakhouse is inviting it by not only allowing irresponsible vandals to stab anyone they please, but by also providing the weapons”

No, instead we acknowledge that the verb “to allow” does not apply in such a situation. A restaurant is not allowing something just because they haven”t taken measures to forcibly prevent it a priori. It is surely against the rules of the restaurant, and of course against the laws of society. Just. Like. Libel. If someone starts doing bad things in a restaurant, they are forcibly kicked out and, if it”s particularly bad, the law can be called. Just. Like. Wikipedia. I do not accept the spin that Wikipedia “allows anyone to write anything” just because we do not metaphysically prevent it by putting authors in cages.