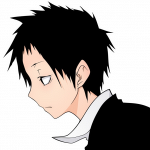 I'm a Belgian Wikia contributor. Even though English isn't my motherlanguage, I'm really good at it and I have no problem with vocabulary and grammar. Just sayin'. I discovered Wikia via the Bleach Wiki. I was just watching the Bleach anime and stumbled upon the Bleach Wiki. I joined Wikia on December 5, 2008 with this edit. I resumed editing on the Bleach Wiki a year later and when I started reading Zombiepowder., I found that wiki too and started editing it. I quickly adopted it and became an admin and bureaucrat of the Zombiepowder. Wiki. My work there is kinda messy, as I had little no none experience then.

I continued watching anime and reading manga and eventually founded the Yozakura Quartet Wiki. I was devoted to this and the Zombiepowder. Wiki.. My journey continued by taking over the Deadman Wonderland Wiki and raising it up to a decent level. At that time, I had some experience and I could call myself a true Wikian.

My love and knowledge on manga/anime grew and I adopted the Kuroko no Basuke Wiki, a manga I recently became really attached too. At about the same time, the admin and bureaucrat at the Ao no Exorcist Wiki made me an admin, even though I didn't have a lot of edits on that wiki. The admin in question, DSM144, saw me on other wikis and thought I was really capable as an admin and he asked me to help him out. As I was a fan of the Ao no Exorcist anime, I gladly accepted.

Meanwhile, the Kuroko no Basuke Wiki grew rapidly. I kept track of my edits and after one month, I had 2,666 edits. My first edit was in July and now (August 2012), I have over 7,750 edits. I'm really proud :). My first wikis, the Zombiepowder. Wiki and the Yozakura Quartet Wiki unfortunately went dead. In September and October, I founded the Btooom! Wiki, the Un-Go Wiki, adopted the Ben-To Wiki and became an admin of the A Channel Wiki. I am currently also majorly editing on the Animanga Wiki, having over 2,000 edits now. I'm an ex-admin over there.

That's about it. Oh, and I also help managing the @WikiaAnime twitter account and I have a recommedation for Featured Wikian pending. Five of my wikis (DWWiki, KnBWiki, YQWiki, AoNoExWiki and BtmWiki) also had a Spotlight.

Oh and I'm a Wikia Star. So that's cool.

You can find me on these Wikis:

Retrieved from "https://community.fandom.com/wiki/User:Bereisgreat?oldid=2175603"
Community content is available under CC-BY-SA unless otherwise noted.