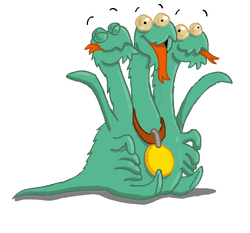 Hydra Guy is the mascot for Gamepedia, representing the Hydra wiki system that Gamepedia wikis used. Hydra Guy was adopted by Fandom during the merger that started in late 2018.

Hydra Guy was fathered by Encredechine via a genetic experiment at Gamepedia's labs. Originally comprised of only one head, Hydra Guy spontaneously grew two additional heads during a particularly challenging wiki skinning assignment that necessitated viewing several screens simultaneously. Inspired by this proof-of-concept, Gamepedia has been looking into grafting additional heads onto its other human wiki managers, with limited success thus far.

While Hydra Guy's heads have not been officially named individually, some popular names used in passing are Peter, Paul, and Mary, or Moe, Curly, and Larry. Larry is the slow one, as evidenced by his pupils that tend to stare off in different directions.

Hydra Guy is an avid guitar, drum, and piano player (often at the same time) and enjoys playing 20 Questions with himself. He's a popular party guest who entertains by making his eyebrows float somewhere above his eyes with roughly 4 inches of clearance.

Hydra Guy can often be seen hanging out with his good friend, Nova, a fellow Gamepedia mascot.