Visit the new Forums
Forums: Index → Community Central Forum → Feature requests
FANDOM's forums are a place for the community to help other members.
To contact staff directly or to report bugs, please use Special:Contact.

Note: This topic has been unedited for 3591 days. It is considered archived - the discussion is over. Do not add to unless it really needs a response.

This page contains an alphabetical list of feature requests. Below you see the reaction of one of the developers of the wikia team. Timbo(Talk) 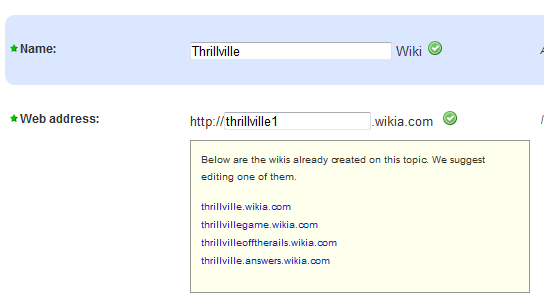 I think it'd be nice to let people see their contributions from all over Wikia on one special page, as well as keeping separate contributions pages on each wiki. --† DustKateb (Talk to Me!) † 14:41, July 23, 2010 (UTC)

The code for this pretty much available, but the usage of the tool is restricted due to it apparently being resource heavy. Joey (talk) 05:50, July 25, 2010 (UTC)

There are not one, but several tools doing this with Wikipedias, and with the number of users across the hundreds of language editions, I'd say the "resource heavy" problem might not be the reason this hasn't been done with Wikia sites. Check them out:
Waldir 16:30, October 14, 2010 (UTC)

It would be nice if there was an option for localized versions of wikis to "inherit" the skin of the "mother" wiki, similar to "shared uploads" but applying to Common.css/Monaco.css/Monobook.css. Localized wikis tend to generally have less contributors (in most cases) than the "mother" wiki, and consequently there are less editors who are CSS-savvy. Having a "shared skin" would allow the

localized wikis to profit from the more regular updates to the "mother" wiki's CSS files automatically.
For example, if you take the localized versions of w:c:fallout you'll notice that almost all of them (try to) mirror the custom skin of en.fallout - but depending on when an admin last copied en.fallout's CSS files, more or less skin elements look out of place (mostly new features which were added by Wikia after the last "sync", and were subsequently never adapted to the site's custom skin). Having a "shared skin" would eliminate that problem. -- Porter21 (talk) 12:18, July 27, 2010 (UTC)

Have you tried telling them to call the entire CSS style sheet, opposed to copy + pasting the current one? The former of course would be much more dynamic in the long run and easier to maintain. However, I can sympathize with you about this: I had to get staff to give me local sysop/crat on a handful of non-en Avatar Wikis so I could just do styling... Something new would be nice, but I can understand if they didn't want to spend resources doing this as well. Joey (talk) 07:16, July 28, 2010 (UTC)

I tried a solution using @import but either it doesn't work or I was simply too impatient when waiting for the cache update. Then there's the issue of some of them not having any active admins and myself not having sysop rights at most of them, as you experienced yourself. It's not something I'd consider high priority, but I thought bringing it up couldn't hurt :) -- Porter21 (talk) 08:01, July 28, 2010 (UTC)

@import WON'T work if it isn't the first thing in a css document. Usually that's easy to do (you put it in the top of the skin file), but one of Wikia's (new) ways to improve page loads is to put all your local css documents in a combined file. Therefore, your @import won't work if the combined file doesn't put the file your @import is in at the top. Luckily, one of your local css pages does go to the top (common.css), but that means monaco.css isn't at the top. What this means is you can't @import from your monaco.css if your common.css has anything in it besides comments. Obviously you can work around that, but it is annoying and note worthy as it may cause you problems. 174.7.79.252 10:33, August 23, 2010 (UTC)

Well, you'd have to put an @import in your common.css as well (i.e. put everything that you currently have in MediaWiki:common.css into MediaWiki:common2.css and @import that into common.css. Of course the speed and size gain of having it all in one file goes away then. --◄mendel► 17:05, August 23, 2010 (UTC)

Wouldn't it be nice it this was done automatically on relevant pages, it's a pain for new users to remember, and regular users to have to 'remind' users (read warn in many cases). Piandao and Scooby! 21:21, August 23, 2010 (UTC)

So, it autosigns my signature when I merely fix the indents on some talkpage, and when I try to delete my signature, it signs it again? No thank you, I'd rather take the opportunity to interact with my new readers and find out how they react to a bit of friendly advice before they get into things that matter. --◄mendel► 16:56, August 24, 2010 (UTC)

You're talking about User:Sinebot - a bot for wikipedia (IIRC, it does a good job at making sure it doesn't sign users who just fix indents, and you can opt out by adding a hidden category your userpage. It also warns users who are unsigned often. I think signing comments is something users need to learn, not accept a bot to do it for you, and as mendel says - it gives editors a chance to introduce and advise newer editors. It's use on WP is because not every edit can be seen (due to the large number of edits) and therefore there will be posts that go unsigned. -- RandomTime 17:36, August 24, 2010 (UTC)

Strangely/sadly we auto-welcome users, and that seems to be 'ok'. We used to be told we should not use calculators in exams (I go back 40 years), "learn the proper way", now it's perfectly acceptable to use them. Is it actually useful to see people cutting their teeth on wiki nuances. I found it frustrating, and the "get with the programme" on some wikis, to be somewhat elite v inferior over something that imo should be unnecessary, especially for guys like me that came from a forum to wiki, to find I had to sign, sign, sign every time i had something to say. It can make new users feel inadequate and that who you are and not what you have to say is more important. Well that's my 2 cents for free as usual. I would like the choice/optioon button, simple as that. Unsigned and all alone! some time today UTC :)

Yeah, it cuts both ways -- when I first come to a wiki, the first couple interactions with people who try to tell me something usually decide whether I'm going to like it there or not. (Tip: being greeted by a bot usually means I don't care for you.) Piandao, you must really like article comments and blogs and blog comments: there's no need to sign those, and you even get an avatar! Voila, what used to be a wiki is now a wikiforum! --◄mendel► 21:59, August 24, 2010 (UTC)

I think Auto sign has a use on places like the central forum. but individual wikis should be able to have it as an option. As was said above if it responded to minot changes (i.e fixing it when newbies post above the header (RTE problem ?)) would be a nusciance. I also find some of the sigs in use very annoying Were the user is called on name and the sig say something totally different. e.g User:Tedjuh10/Mark. IMO the Wikipedia version of signing that has a link to the users talk page is better than wikias standard sig as well as 9 time out of 10 it is there talk page you want not the users 'Home page' anyway. - BulldozerD11 22:36, August 24, 2010 (UTC) (without a fancy sig that clutters the page up with code)

Retrieved from "https://community.fandom.com/wiki/Forum:Feature_requests?oldid=574045"
Community content is available under CC-BY-SA unless otherwise noted.