Visit the new Forums
Forums: Index → Help desk → Ad glitch
FANDOM's forums are a place for the community to help other members.
To contact staff directly or to report bugs, please use Special:Contact.

Note: This topic has been unedited for 4028 days. It is considered archived - the discussion is over. Do not add to unless it really needs a response. 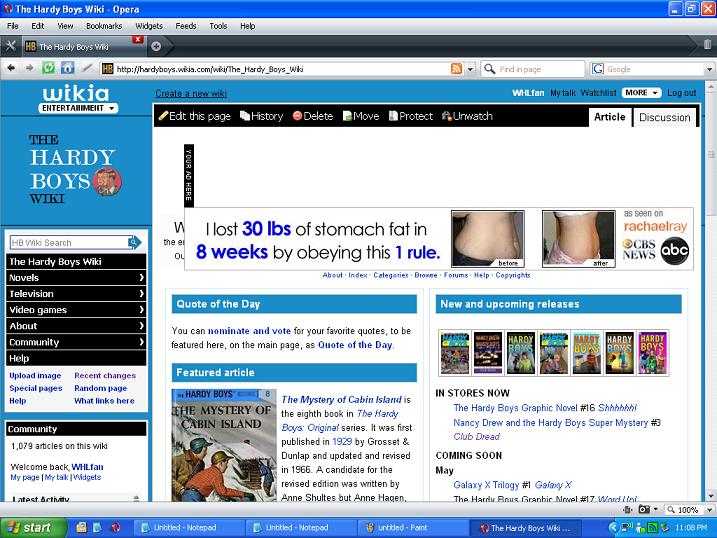 As if a picture of some woman's fat body on the mainpage isn't bad enough, now it's covering up content and navigation!

It seems the "Your Ad Here" tag is pushing down the banner ad. I'd rather readers' ease of use wasn't hindered because of this glitch. I hope this issue is sorted out soon.

I've reported this a few days ago using special contact. The first time i saw this, it was on GuildWiki. Since then, this ad showed up a lot on ROSE Online wiki and that's why i reported it.
I think you are correct; the small image to the left is responsible. But i'm not sure if it's just that the space Wikia reserve for the banner is just too narrow or what. I mean, the banner might be of the same width of others banner but that added thing might make it wider. But i can't be sure.
So, now we know it does de same in Opera than in IE7.
That leave Firefox yet to be reported as showing the same thing. — TulipVorlax 07:53, 6 May 2009 (UTC)

It has been reported, and we are looking into the cause. It seems something is not making the two overlap the correct way. --Uberfuzzy 00:02, 7 May 2009 (UTC)

I saw it with another ad but the small image to the left was present so i think there was no need to take additionnal informations.... — TulipVorlax 06:28, 7 May 2009 (UTC)

Now a glich to the left

Prior to the report done above i did a report on an issue of an overlapping advertise advertise to the left, i got a not so satisfactory answer but i had to wait a while before i re-test (the usual server cache or my cache issues so i add here the image as for some reason it did not went trough my first email. Maybe some one happens to see it but im doubtful since this was previous to the change done to the advertise behavior (old behavior was ads appearing in between widget boxes). Now my latest issue with ads is that Ads now are overlapping the widgets, of course im using extreme conditions... first im using ALL the widgets available except the community one that cant be add once its remove... (since i have been doing the last week CSS tests), 2nd im using a long page that triggers 2 ads on the left (that i want to note that when i had the my previous left ad bug there was 3 ads on the left + 1 ad inside the article), to rule out my CSS i have been using the &useskin=monaco&usetheme=sapphire. Here is an example thought this example is aid by some templates that i dont know how much time i will keep those templates live as those templates are my personal sandboxes that i reuse constantly.

The picture was taken with FF 3.0.10 in full screen mode

The advertisers links are: left:top

Both are flash so i dont to what ad belongs

Retrieved from "https://community.fandom.com/wiki/Forum:Ad_glitch?oldid=275904"
Community content is available under CC-BY-SA unless otherwise noted.