I'm trying to get this block lifted, now that StarLightNova/MechQueste has been blocked. I do not want to add non-canon info into that.

In April 2019, my account got a 100-year block on the Mortal Engines Wiki by MechQueste, later known as StarLightNova. This, I feel, is the cause of all of my personal grief that was later brought upon by Kiwi Farms (through users Analog Devolved and NerdShamer).

Now, with StarLightNova/MechQueste has been globally blocked from the Wikia/FANDOM network, I would like to see this block reversed. I do not want to add non-canon info to that wiki.

I did. And thanks for the advice. But beware of BatteryIncluded, Analog Devolved, JustARandommer and Koncorde.

But I do have issues with Fandom, though. Particularly Kirkburn, of whom Kiwi Farms' NerdShamer claimed he paid.

@Tupka217, what about this thread? NerdShamer is among the participants here.

@Tupka217, aren't you aware of a Kiwi Farms thread about me?

In this thread made by Analog Devolved, he made false claims about me bolstering the narrative spun around by JustARandommer, Koncorde and BatteryIncluded (even going as far to claim the 2018 Mortal Engines film adaptation as "mankind's magnum opus", thereby fooling himself) with NerdShamer claiming he paid @Kirkburn to do the dirty work.

Understandably, this brought my personal grief that @GethN7 said on my message wall.

NerdShamer is one of the participants of the Insurrection 2021 thread on Kiwi Farms, which I felt responsible for partly inciting the Capitol riots.

@GethN7 apologized and is now helping me.

GethN7 has severed all interactions with Kiwi Farms, and so do I always.

I want to warn you all about Kiwi Farms. It's true that the site brought me personal grief. But some like @StoneKnightMan and @Kirkburn maintain contact with Kiwi Farms.

Why does FANDOM and its staff seem to have connections to a notorious cyber-harassment forum site called Kiwi Farms? That website is a breeding ground for internet extremism, and people knows it, especially since the Capitol riots in January. The site’s owner is Joshua Conner “Null” Moon, a former 8chan employee, who was even too extreme for them was fired from the website for admission to watching child porn… Joshua Conner Moon (aka Null) is a well-known neo-nazi and pedophile who started a thread called “Insurrection 2021” on his forums, believed to be one of the inciting areas of the riots. Its members include NerdShamer and Analog Devolved to name a few.

There are some users who maintains contacts and connections to the members of Kiwi Farms. Logo Wiki @StoneKnightMan has an account registered on Kiwi Farms. Another Kiwi Farms user, called NerdShamer, has some interactions with the staff and users; @Kirkburn is among them. Do you have any morals or ethics to address this, knowing that leaving Kiwi Farms alone mean more problems in the future when it comes to protecting ourselves on FANDOM and elsewhere? As with NerdShamer, The Un-Clit, Begemot, HumanHive, Frank D'arbo, Just A Butt, StreetGangsta, Randall Fragg, Battlecruiser3000ad, Joshua Connor "Null" Moon, and Adamska, most of which had participated in the thread that somehow sparked the Capitol riots, one is present in the September 2019 leak on Doxbin.

I feel that the FBI and any authorities should be looking actively investigating and looking into this, if they aren’t already. Plus, there’s is going to be a reform of Section 230, the rule that protects internet companies such as FANDOM from liability over what is being posted, as well as the actions taken by users and staff alike. FANDOM and its staffers need to come clean.

I fight as I always have in the name of kindness, empathy, positivity, and the protection of innocence and emotional vulnerability across the globe.

EDIT #2: @GethN7 has responded and is willing to help.

@Andrewds1021 That user got blocked because of the fact that he contacted BunsenH and made a essay for him which was an appeal for my MSM block, sadly it didn't go through and another user contacted Fandom to globally block him.

Regarding on how Kirkburn and MechQueste are connected in some way.

I believe the content was appropriate because Future Wiki's policies allow. It was inappropriate for them to delete it because it creates an impression that they want to protect somebody from what they see as "harassment" on others.

My evidence that this was done with malice is presented below: 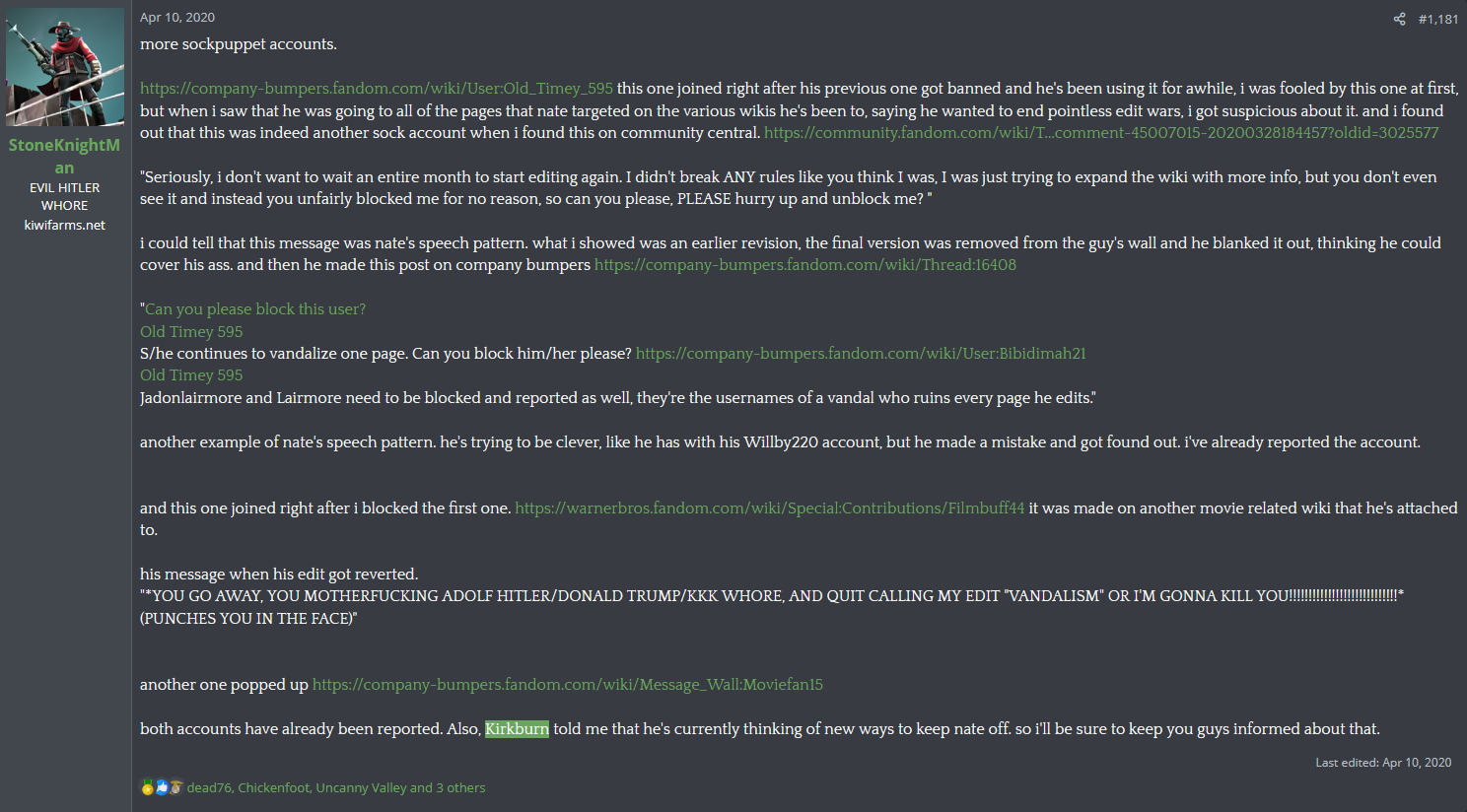 It's a mistake that he didn't consider the policies of the Future Wiki before doing so.

Remember, our voice of reason are being drowned out. This is why I'm frustrated with.

These tweets may show Kirkburn's incompetence and apathy.

Regardless of that, I am still frustrated by the actions of Kirkburn at the Future Wiki, and by extension, MechQueste. I do still believe my grievance is legitimate. How do I do that without making accusations?

I think contacting the local admins about this matter. There is nothing wrong about the content.

I suspect that Kirkburn (and by extent MechQueste) may have shady connections and some ulterior motive in pursuing some secret agenda via extreme worshipping of the rules bestowed by the wikis. I've heard Kirkburn is being mentioned on Kiwi Farms, and one Twitter user in the links below.

It is believed he is one of them who supported the baseless opinion to support the 100-year block on the Mortal Engines Wiki made by MechQueste.

I am frustrated, and it's not possible because Kirkburn could be a dogmatist and could harbor an secret agenda or some shady connections (i.e. Kiwi Farms and 4chan). I wouldn't be in a position to accuse Kirkburn of such wrongdoings because doing so will get me globally blocked.

That wiki could allow anything. See the link. Then discuss this matter.

Here is the evidence of Kirkburn deleting articles.

I did. However, I already know this might be going to fall on deaf ears, but I owe it to others to record what I saw. I'm not sure if I believe it myself, but there's a possibility that some users have an agenda that we don't yet fully understand.

Kirkburn wrote: Bryan D. See, this is not an appropriate way to deal with being blocked. I suggest you find another community to take part in, as it does not appear your block will be lifted any time soon (and I don't foresee Fandom intervening).

If you are considering self-harm, you need to go and get help. Please consider taking a look at https://suicideprevention.wikia.org for various helplines, and please stay safe.

I'm trying to. And I'll try my best. At least one user other than me is having problem with MechQueste, I know.

I've consulted with other administrators on the Mortal Engines wiki. Our opinion is to keep the block as is and not to lift the block anytime soon. Given that there are two recent edits that I will cite:

both of which on a wiki dedicated to the film version. Both pages were taken from the Starblade wiki. Needless to say, both pages are irrelevant. If that's an indication of forthcoming edits, then the ME wiki does not need any cleanup effort for those types of pages.

But it needs tidying up and cleaning up. Why do you leave it in a mess? MechQueste, you seem to be a bigot who ignores objective-based facts and evidence. I know you pointed out the irrelevant ones that shouldn't be allowed on the ME wiki, but you are lying for the most part.

And Wiki-defender and BatteryIncluded ally JustARandommer took an opportunity to distort me to the point of forcing me to kill myself via meds.

What should I do to prove myself to get me unblocked? If not, die?

AlmightyQuirke wrote: Bryan they arent made up, you keep trying to add your own fantasies and fan fictions as fact on the wiki. We will not unban you until you actually and definitively prove you won't.

Most of my edits are mainly cleaning up, tidying up and adding relevant information. I didn't and I won't for the most part. I won't add any irrelevant and/or fan fiction on that wiki. Ever. I'll keep my word.

ShardofTruth wrote: At least MechQueste gave you a reason for the ban. I complained about him violating the community guidelines which resulted in a 100 year ban for "disruption" and him deleting these messages from my wall.

The reason for this ban is entirely made up. So do I. This user appears to be retired at the Mortal Engines wiki, but you need to report him regardless. I did. So I agree with your assessment, but I know the reason is full of un-truths. He is conjuring fictions, and people like JustARandommer and Nox Lucis bought into these on Reddit.

I've made a proposal.

I've made a message wall regarding the overturning of the 100(!)-year block.