Agree. Basically the DPL forums is just the old forum system before threaded forums were introduced back in 2012. This pretty much means it's gonna be a major step backward from what we currently have. It's much more complicated, has less features, and is way more difficult to use than threaded forums. Fandom should really reconsider this decision because these moves do absolutely nothing to improve their site and will be detrimental to many communities that depend on the threaded forums.

And Discussions won't cut it either as it looks a lot like some kind of Reddit knock-off with absolutely no customization and no way to organize posts with subforums or the like. None of the replacements are good alternatives. They should've just ported the forums/comments/wall to the new version of MediaWiki instead of completely abandoning it. If Fandom can create Discussions, why can't they port the forums?

Recently, our wiki's under constant attack by a vandal, which repeatedly screws up our reporting thread every time by spamming text with huge font size that makes it lag so hard and extremely difficult to remove.

An example is this:

Can someone tell me how to fix this huge mess quickly? I've tried inspect element but it's really tedious and quite impractical considering the lag. This dude keeps coming back so he probably used a proxy or VPN, and cleaning this thing up isn't an easy job.

Something that instantly reverts and/or deletes this user's actions is appreciated.

(edited by administrators)
Vandalism
A reply to Drek'TharSuperSword
1

OK so apparently they changed it intentionally due to test wiki. Not sure why Community Test and Admin Tools' robots.txt weren't changed (as both were meant to be test wikis as well), but they did that to separate real and sandbox/test wikis.

I'm just disappointed by them because this was never announced anywhere. They should've put some blog on this wiki (just like what they did with updates and whatnot) so that people know this is deliberate.

Also, the fact that some of the contents are indeed "real" (such as fan fictions migrated from another wiki due to it being deleted there), albeit only a few of them, just really forces me to create a new one just to store them.

This is what they said:

Well, I ever checked out its robots.txt sometime after the wiki was created, and I can confirm it was the normal one. I mean if it wasn't then I highly doubt it would make it into Google searches at all. This didn't happen yesterday, as I could still search the wiki on Google properly.

Maybe they were doing some robots.txt test on certain wikis but they forgot to revert it? Who knows. But whatever it is, it can be a serious issue if it happened on bigger wikis that do contain actual information, as this would go unnoticed until someone on that wiki tried to search for the site and notice that it becomes hidden due to the site's robots.txt.

Fandom currently haven't fixed it yet so I probably have to wait for the next 12 hours (usually I got their responses after around a day). Also, I've NEVER got any kinds of notifications that my wiki's robots.txt has been changed by them. Not on message wall, not on email. Nowhere.

I've contacted Wikia staff just for clarification about this because THIS normally wasn't supposed to happen at all.

Tell us what they say.

Well I haven't got a response from them yet.

So my test wiki's robots.txt suddenly changed itself to this.

Which means that NO search engines SHOULD index my test wiki. Which is weird because robots.txt wasn't supposed to be able to be tampered at all.

I don't know why this thing happened, but I highly suspect that Wikia started implementing a spam filter so that when it detects something fishy on the wiki it just replaces the whole thing so that it ISN'T indexed by Google.

I know that dtss-test was supposed to be a pointless test site, but still. This makes me aware that something fishy's happening silently. I mean, there's no way you can change the robots.txt so I highly suspect it's been changed by a staff or something.

I've contacted Wikia staff just for clarification about this because THIS normally wasn't supposed to happen at all.

Not sure if anyone else got this problem before, but maybe it was just my test wiki.

OK so I was playing around with a Discord bot's google search feature and then suddenly it showed a link to some site called WikiEden. The URL in question is http://gta.wikieden.com/wiki/Dialogues_in_GTA_V 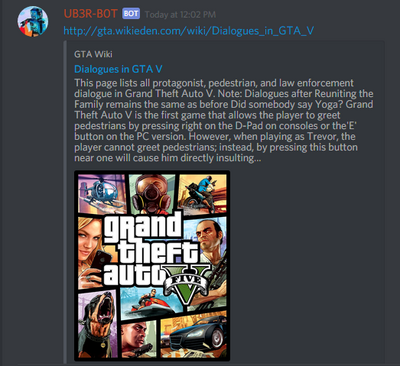 However, when I click on it, it seems to redirect to some random spam like assigntraffic.com, twit5ter.com, etc. and it doesn't show the real content, even using something like Psiphon doesn't help (usually it's the ISP that's doing this sometimes, so using Psiphon clears the DNS-related mess, but it doesnt seem to be the case this time).

Then I decided to use Google's web cache to figure out what the hell's going on over here, as well as to see the original content, and... 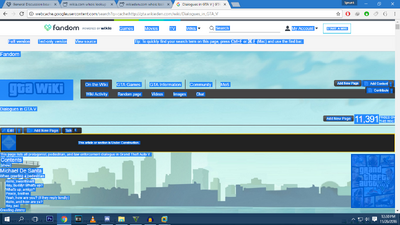 Surprise, surprise! It seems to be a Wikia page (which is actually this page). The picture on the Discord preview even shows that it's hosted on Wikia Vignette.

However, judging by the redirects made by it, it seems to be a spammy mirror hosted by someone (who's probably doing it to earn revenue or something, maybe even inject its visitors with malware).

Whois lookup results for wikia.com and wikieden.com are different (the links given are from who.is), meaning that wikieden is run by someone else.

The question is, does the Wikia staff know about this? I mean, this is probably an attempt of malvertising as well as impersonation of the Wikia brand. Basically it's deceptive, and might as well be reported. So far I didn't get any malware infections by this, but just be careful in case this thing actually spreads some kinda malware.

OK, since the HeroImage feature has been removed from Wikia, it makes putting hero images harder.

However, I need to design a flat UI for the PvZ Fanfic Wiki, which will involve putting a hero image on the main page (which is what most websites have with flat UI in their home page nowadays).

The hero image must hide the wiki navigation and wordmark (global navigation stays due to Wikia policy though), just like the HeroImage feature.

Another thing that I wanna have is to get the "START NOW" button on top of the image, as shown in this image. The button must be a real button element (button span/div of some sort), so that it looks like those on professional websites. It also must be big enough, so that it's visible. The button should link to this page (Special:CreatePage).

I have another copy of the image without the "start now" button here (which is the one I want to use).

I know, the image might look quite unprofessional, but that's because I'm not a designer. I might as well make it look better in the future, to make it look a bit more professional.

Any way to make this kind of thing in the current wikia layout? If yes, then tell me what to put in those MediaWiki stuff.

Yet another coding issue on the PvZ Fan Fiction Wiki.

I edited the wiki's Wikia.js and put the code to hide the "Plants vs. Zombies Fan Fiction Wiki:" prefix with this:

Are there any coding errors on the script? Do I need to do something other than tweaking the Wikia.js? Or, is this something that needs to be requested via Special:Contact?

I'd be glad if you can help me and explain how to do it in detail. Thank you.

Well, NVM. I added more font types, TTF and WOFF on the Wikia.css, and that fixes the issue. Code:

BTW, can anyone explain why isn't OTF supported? Seems like the issue got fixed after adding TTF and WOFF files. You know, it saves more time to just use it rather than converting it to TTF and WOFF first.

Well, I'm a CSS-amateur so sometimes I may need to ask help so much.

OK, so I've tried to add custom font to this wiki, just like Khan Academy Wiki, that has the "Comic Neue" font, by adding this line to Wikia.css:

However, the font didn't load. Instead, it uses the Times New Roman font. Since I don't wanna mess up the entire wiki, I removed it, and instead I put it here, and tweaked it a little bit so that it will only load on my contributions page.

And the reason why I shortened the word "regular" to "rg" is because it's the actual font name on the original font file. However, it still doesn't work.

I've seen some websites using custom CSS fonts like this and they work seamlessly. However, I don't understand why it doesn't work here.

Anyone can try to fix it?

Are there any requirements to enable it?

I've tried that, but doesnt work. I dont know why.

It is really weird that I got stuck at "loading editor" message now. It is just stuck there and wont load the visual editor. Can someone tell me how to fix it?

Note: I've tried using monobook skin but I dont like it since it is in source mode. The editor in forum works but not for article editor.

thanks ! the fix works!

I've tried to make this template's parameters working. It is a template for semi-protected pages like Wikipedia (I tweaked it), but it won't work for some reason. It's just display {{{1}}} instead of the specified date. The parameter is for the protection length.

Code I use (currently)

The error is locted at "This fanfic is semi-protected until {{{1}}}". Any help with this?

After seeing the chat message on Plants vs. Zombies Character Creator Wiki, I'm got interested, it says "Live PvZ Battle" instead of "Live! Chat". Would anyone tell me how to change it?

I'm recently learned how to make a background for userpages. All other userpage works except for my userpage.

I put it in MediaWiki:Wikia.css

This is what I use.

Both works (for other userpage) but for my userpage it doesn't work. I correctly insert it like this.

But somehow it doesn't work. Any ideas for making it to work?