Nope. If I close the tab and try to click 'Edit' again, I get shown the same message and am presented with the draft copy again. The dialog box should give you options like "Continue editing draft" or "Edit the most current version" at the very least. I'm surprised (and frustrated) that this change was simply rolled out rather than offered as an opt-in beta feature.

I want an option to opt-out because it kept giving me a draft copy of the page to edit after I made a revert to the page I was editing. I wanted to edit the current version of the page and it keeps bringing me the draft copy, which was an older version of the page. There definitely should be an opt-out feature, and it should definitely be made more evident in the user interface that drafts are being saved.

Andrewds1021 wrote: Are you sure none of the other admins submitted the request? Either way, Tupka217 is correct. Only staff would be able to actually tell you what happened.

I got a response from Staff earlier today. There are no other active admins on the wiki aside from me, and I most certainly did not submit the request. The change was done for SEO optimization, which I can understand, but it still doesn't excuse why this was done without even notifying the community.

NB: This is not about the wikia.com --> fandom.com debacle.

The Last Stand Wiki had its URL quietly changed from tlaststand.wikia.com to thelaststand.wikia.com around November 30 -- it was so subtle that I didn't even notice until today. Yes, I can imagine a million reasons as to why this URL change was done, but that's not what made me angry: the thing that concerns me is that this change was done without any notification to the community whatsoever and was done without even the slightest bit of consultation prior to the matter.

I've already emailed Staff and want an explanation as to why this was done. Even with the wikia.com to fandom.com kerfuffle, community members were at least notified. Why on earth was this change done without even any notification?

This has to be the zillionth change to the navbar in the course of a few years.

The current navbar is designed to look the same on all wikis, which is problematic as not all wikis look the same. You can't be saying that the current state of the navbar is a "one-size-fits-all" design because it isn't. On a wiki with lighter themes or themes other than the shade of blue the navbar uses, the navbar sticks out like an eyesore. The navbar should adapt to the theme of the wiki; why not make it, to an extent, customizable in Special:ThemeDesigner, or at least match the colours set in there?

Secondly, the ability to hide the navbar by scrolling down is what made me happy in the first place. I could simply hide what I didn't need to use right now as I focused on reading the text. Even in previous navbars, the navbar would at least fade and become translucent when I scrolled down, so it responded to my scrolling. Why remove a feature that was so useful to again permanently fix this navbar on my screen that never goes away?

You need to stop forgetting advice people gave you in the past and repeating the same mistakes. You also need to cut it out with this "no opt-outs" scheme and give people the choice to use your new changes or stay with the old for even just a little while longer. Instead of just suddenly migrating everyone to the new, have it available as an opt-in beta feature and collect feedback then rather than releasing it as final right away, with no method of reverting, and then waiting for feedback.

I'm noticing that pressing g and r no longer takes me to Special:RecentChanges; in fact, it looks like it has been removed from the keyboard shortcuts menu (although the help page still references it). A bug or a removal of a good feature?

(Also wanted to note that the classic keyboard shortcuts don't work on Wikia/FANDOM at all, which is now doubly frustrating for me)

The "Quick Stats" section in the admin dashboard is displaying "0 views" again; this time the edit count is also broken. 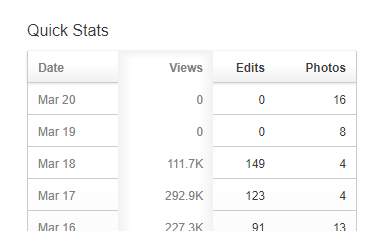 Quick fix for this or no?

Things seem to be working now. DisplayClock, navigation popups, and HideRail are working from my brief observations so far.

I have also been unable to load a large number of JS since about three hours ago (That's when I woke up). Some scripts are working, others aren't. It doesn't appear to be affecting all users, and it definitely isn't affecting everything.

EDIT: I went through my global JS file and here's what isn't working:

(edited by K6ka)
A reply to Kirkburn
0

Posting in message walls counts as a change in the database, so when the servers are in read-only mode, message walls are amongst the things that will be disabled.

I've experienced the same problem on other wikis as well. It seems to be related to the Google Chrome browser and large file sizes, since I don't encounter this issue in Firefox, and not with smaller files. I've sent in a bug report to Wikia several months ago and got a response, but looks like they still haven't fixed this yet. To get it to play, go to the file, click on it, click on "Download file", and then press Shift+Ctrl+R.

(edited by K6ka)
A reply to Original Authority
1

I think it is possible to do it with AWB. I believe there's an option to scan a page for images, which you can run the bot on to add the category.

Jr Mime wrote: First of all, the "span"/spam you are describing should not appear at all. Special:Contact/bad-ad.

I believe he is referring to the HTML <span></span> tags that the rich-text editor often foists on you unknowingly when you use Ctrl+B or Ctrl+I. These tags can't be detected in RTE and must be removed via source mode. AFAIK they don't do anything other than make it difficult to read diffs and the raw wikitext of the page.

Preferences aren't saved via cookies, they're saved directly into your account, so preferences should carry over when you switch to a new browser or computer. My preferences are a bit wonky as well recently. It took me a full week of repeatedly changing my preferences before the site would stop loading the rich-text editor and load the source editor like I had specified it to.

You can mass delete pages using AjaxBatchDelete. It works better than AWB, in my experience.