I'd like to make something similar to the Connect box Community Central has on their main page because it's nice. I looked at the code and got the Connect part and Staff part down but it doesn't look right.. 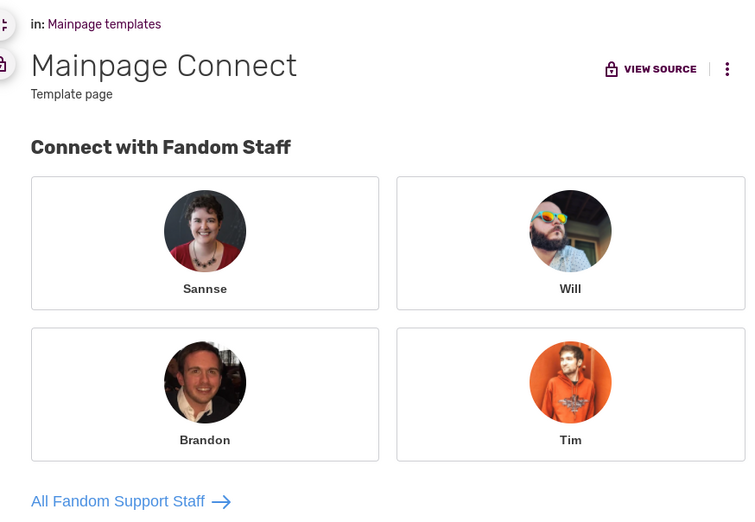 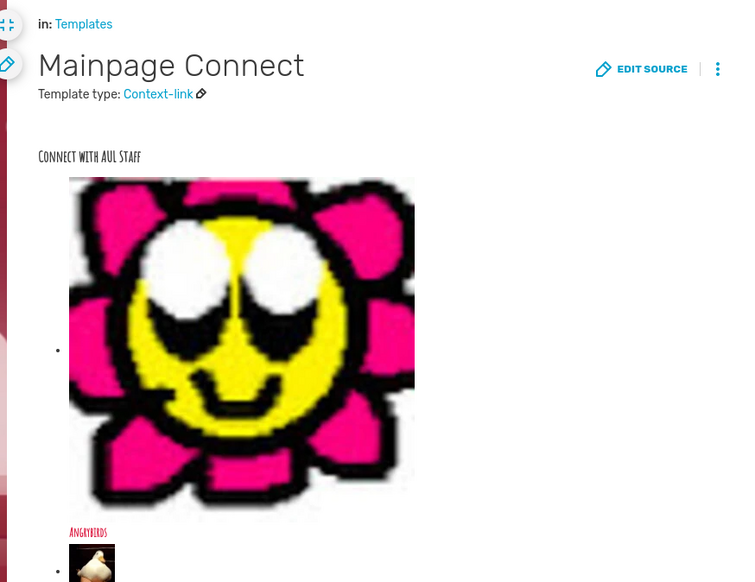 Is it something I'm missing or something I have to insert on wiki code (like JS or CSS), idk.

Hello, I would like to know more about the rights of the content here on Fandom and to know if I can set the content of my wiki to All Rights Reseverd because I'm a little bit tired and sad of getting all my articles copied from my wiki by a any person and copy pasting everything to Wikipedia.

Because this really sad because I pass more than five-six hours per day to make my content and it is a little bit disrespectful and sad to a person who is making it's content everyday and not getting its rights assured.

And I would like if you could read both articles carefully to see what I'm telling.

Also, I would like to hear more about it, including by the staff, specially by Mr. @MisterWoodhouse, since he is clearly responsible by the recent changes Fandom had and since he is a member of the staff, to have a more insight about this thing.

Hope you can understand my side.

Thank you for your time

On some pages, I have to scroll through profile images, when the old one would just have all the buttons visible and clickable.

Also I don't like how spaced out and small the text seems now.

Is there a link to suggest a change to Fandom wikis in general? If I have an idea I'd like to see implemented, like a non-existing feature that I feel as needed, I end up using one of the following paths:

3. I am reporting a problem on Fandom (or)

3. I don't see an option for my issue

But that feels unintuitive, weird, or even wrong. Is there a better link for that purpose that I'm really missing, or it's intentionally done that way to discourage suggestions from regular users?

So this could also be a suggestion on how they could (maybe) improve the way they receive suggestions.

But before Fandyllic asks why I'm posting it here, I'd like to say that I've tried the Fandom Disccord, and I got practically zero helpful answers to an issue I had with infoboxes, and when I detailed the problem a bit more, I've just been left there with no answers at all.

On a certain dead wiki, sockpuppets are becoming a huge pain in the ass for constructive contributors like me and staff. What do I do?

Recently, me and a few others in the Official Super Smash Bros. Crusade discord have been trying to make much needed changed to the game's wiki page (https://projectcrusade.fandom.com/wiki/Project_Crusade_Wiki). But one user in particular, @PKbrickboy , has been getting in the way. For over a year, they have created multiple pages for characters that have never been made for the fangame nor have any proof of said characters being in development. They are going against the first rule listed in the wiki:

"Unless you are an admin, DO NOT make a page. There are some dangerous people out there and we want to make sure that pages stay secure from the moment they're made. We also want to make sure that they meet the content standards set by other pages.If you would like to volunteer to make a page, join the forum and PM one of the wiki's admins with the information that would be displayed on the page."

Whenever other people deleted the pages for them, PK has consistently added back onto them. In addition, they have constantly made pages for newly released characters without filling any crucial information about the characters themselves. At the same time, various character pages haven't been updated in months.

There have been no active administrators on the wiki, while the owner themselves have not been active since 2012.

Is there any way that new administrators can be appointed without needing the owner to be active? I feel that, if other people can be given the role, the wiki can be given its much needed improvement.

(I can provide screenshots if need be)

I'm the Bureaucrat on the Boomerang Fu Wiki, and I'm trying make staff roles. First, I'd like to make it so certain ranks get colored usernames. Thank you in advance.

Also, this community is very small, so any help would be welcome!

Have a quick and easy question. How do I contact local admins if they're around the community site?

how to be a Wikia staff  what they do

Somebody should fire the server people since I keep getting the sorry-not-sorry "Sorry! This site is experiencing technical difficulties!" message!

(edited by Timebomb192potato)
Staff
I have a wiki that looks good but on Mobile it's kind of broken and without making it bad on PC. I don't know how to fix this. Is there a way to detect who is on Mobile and get them to a seperate page?? Or show something else?
(edited by Cooloiwj)
Mobile webStaff
This post is locked.

The abuse against me in question is extreme and long-term in nature and very much warrants special intervention, and as a result I need a means of properly reporting it to a venue that will uphold my rights, and preferably be publicly visible for the record of exposing the abuse.

I just noticed this a moment ago that when going to my wikia's recent activity page, it only shows the first one, I don't know if this is an isolated issue or is other people have this issue too, can I get some advice on how to fix it? Thank you.

I have recieved this error and an inability to proceed.  Please advise.

"Invalid user! You are not logged-in or do not have rights to proceed"

The file was a screenshot of suspicious "hidden revisions" actions on a particular wiki: http://es.smashbros.wikia.com/wiki/Especial:Registro?offset=20180702024358 (see the removed logs). One usually hides the username of a vandal, but in this case it wasn't vandalism. Those entries were removed several hours after they happened, and several users already saw what was posted there. Even if the username that posted the messages was offensive (which wasn't), the entire log is removed, even the user that performed the deletion (which is the same user that hid the entire log).

Does anybody know how it's possible that a file gets vanished after it has been viewed by users, without any logs about it's deletion?

When you search on the main wikia.com page, the search results page I feel is a little...imbalanced. The left hand 2/3rds of the page is dedicated to fandom articles, and squeezed into the right are results of wikis.

The problem is the terrible quality of Fandom articles, and the "elite" few who are able to create or edit them. For example, I am an administrator on Wiki 24. The wiki has been around since 2005, as one of the most comprehensive and accurate sources of info on the TV show. If you search "24" on wikia com, you get:

I can't help but feel a certain dissatisfaction with this treatment - there is no engagement between staff of "Fandom" and the wikis that form the backbone of everything being written about on the site. The wikis have been relegated to second fiddle, and it leaves something of a bad taste in the mouth.

Since yesterday, apparently, it's no longer possible to use the CSS style "position:fixed" on any page, since it's blocked by Wikia's spam filter:

The following link, text or pagename is what triggered our spam filter: position:(\s+)?fixed (Block #86343)

I reported it on the vstf wiki, but I found there were another users complaining there also: http://vstf.wikia.com/wiki/Report:Spam_filter_problems?oldid=31466#Repetition

I was appalled at Rappy's response: Wikia Staff is not going to remove that filter, because they added it with the specific purpose of blocking it. It's not a filter against spam, but a filter to enforce Wikia's Terms of Use. On the previous link I think it's pretty much well explained.

The reason provided by Staff is:

While I can agree thet it may obscure ads, I really think staff overreacted here. Let me try to rebate those points:

First of all, this kind of CSS is only being used in user and user talk pages[Citation: See all the reports on the provided link: all are from user and user talk pages!!]. I agree some users may be using it in an annoying way, but please don't generalize this with all of us that don't. It's like those that use background colors to give a page a more eye-candy look and those that use it to cause retinal detachment.

It obscures/blocks takeover ads. While this may be true (it'd only obscure a portion, btw), from what I though, takeover ads only happen very few times according to previous wikia blog posts about them, so what's the matter here? It's being used only in user and user talk pages, very few people will get a takeover ad on such page, and unregistered users (who see ad normally) do not navigate through such pages.

It's causing issues with users viewing Wikia on tablet devices.. As Joeytje50 said, mobile skin strips all CSS so it isn't affected. And again, such users usually navigate through content pages and not user and user talk pages. If they do, they're probably the same user than the user page and will change that CSS if it finds it uncomfortable.

And another concern is that some custom scripts are being used to open part of the wiki page on a fixed box in the middle of the screen, using that CSS to place the box there. That CSS is now being blocked also.

This is quite an important change that should at least be advertised, as it's being used by several users (according to the quantity of reports on that page). Since Staff hasn't advertised it, and the vstf channel is not the right place for it, I've decided to create this forum post so other people are informed about what just happened and that this spam filter isn't going to be removed by staff.

I could send the report through Special:Contact, but Rappy is very aware of this, so I think sending the report from there to be replied by the same person that implemented the spam rule won't make any difference

I recently came across this wiki called Physics:Problems and Solutions.

It is full of spam and self-promotion by this person called Kaliambos.

Could a Wikia Staff please delete all his pages (I have tagged them all with {{delete}}) and files uploaded?

Just to note: The administrators have abandoned the wiki, so I cannot ping them.