How do you insert an image when you are editing your profile page on characterbox? please someone help im so desperate!! 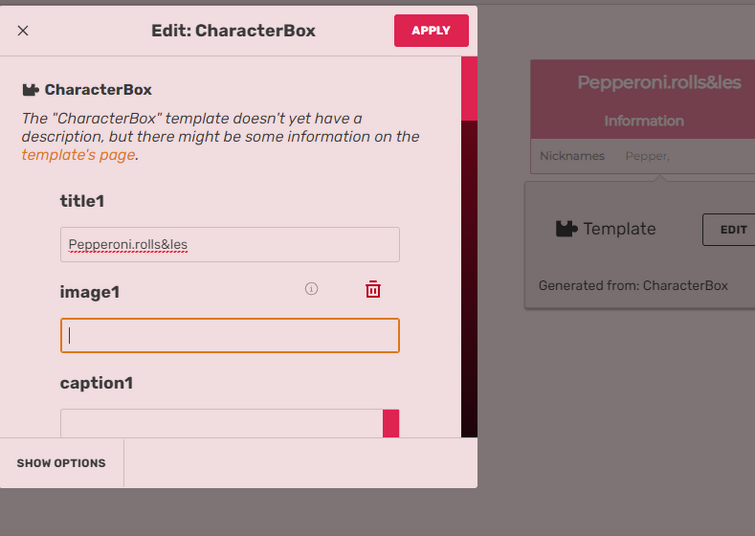 Hello there! I am an admirer of Wookieepedia and I design my wiki from it all the time. One of the things I've noticed is that it has icons in the top right with links to indicate the type of page it is. I want to add this to my wiki, but I have no idea how to do it. I know that Wookieepedia has a template called "Top" where they add icons and links to the top of the article, but I would like to add a template, similar to the Template:Top, on my wiki, so that I can add icons as well.

Syntax highlighting isn't showing up for me when editing. Is anyone else experiencing this? Is there a way to solve this? 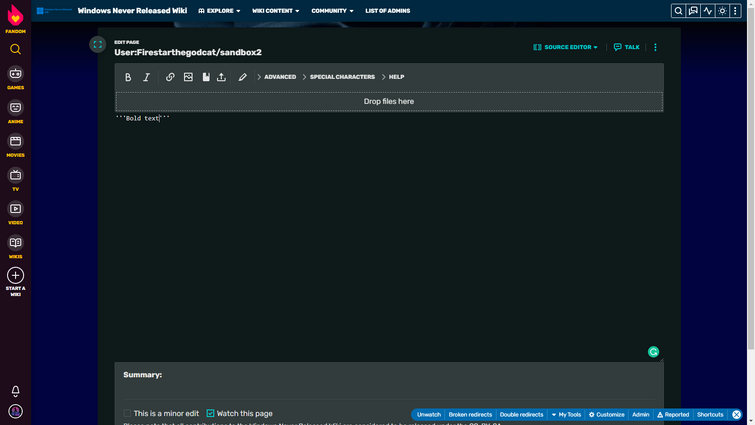 hello! whenever I use visual editor on mobile, it is extremely laggy, but source editor is not. why would this be? it’s starting to get annoying and I am falling behind on editing because of it.

For this past week, I can't edit a page because the editor is blank. Tried cleaning the cookies and reverting to Desktop mode and back, but it just doesn't work. Even worse is that it's only on 1 particular page. Please give me some advice on how to fix it.

Does anybody know when FANDOM mobile can adapt to the new MediaWiki update?

For the original usage, see Anthem's Cortex Entry: A CRY FOR HELP page. I've already changed quite a bit on Dark Devotion's version of the Cortex template (now called "Codex") after exporting, so the changes will be listed at the bottom just in case someone gets confused.

One of my remaining steps in repurposing Anthem's Cortex templates is adding a dynamic image above the main body of text.

How should I go about making the entry_image (previously named "loading_image") appear as a link on an icon below the Divider Special 2.png? I'd prefer the link to open up like thumbnails on the page would if easily possible.

Here's an example of an entry_image and an uncropped version of the icon I'll probably use. In the case of there being no entry_image, I'd like there to be no image at all.

Here's what I was told to do: "You add images in the same way you would add to a page. Just add the image right next to the divider. Insert a break (<br />) between the two images."

Below is the line they're referring to:

These are the two lines that entry_image appears on:

I'm not sure if a part needs to be moved entirely or what.

For the original usage, see Anthem's Cortex Entry: A CRY FOR HELP page. I've already changed quite a bit on Dark Devotion's version of the Cortex template (now called "Codex") after exporting, so the changes will be listed at the bottom just in case someone gets confused.

One of my remaining steps in repurposing Anthem's Cortex templates is removing certain requirements, starting with the "loading" requirement in entry_image (previously named "loading_image"), but I'm basically lost in code.

"loading_image: This is an optional field. This is to be used only if the main [now called "affiliation"] section is loading." -Anthem's Cortex doc

Here's what I was told to do: "Loading screen entries and their images are a special section in the entry parameter. You can remove them over there."

Below are the cases of "loading" that I feel could be it, but I'm unsure of which one.

Because of 1.37's deployment, the left side of the source editor is now numbered. I assume it's because of code highlighting? Is it intentional?

So I just noticed something really weird that haven't happened before.

Any new templates, once the source has been created and saved... it's stuck like that.

When I click Edit Source to change a template, all my previous templates works without issues, nothing weird there.

That's where I'm stuck at. A reload doesn't work. Clearing the cache doesn't work, restarting the browser or the computer does nothing either.

And this happens with all the new templates.

While all the previously made templates can be edited as normal.

I should add that I'm the Bureaucrat of the wiki, I created it, so I'm the admin there. So it's not that I don't have the rights.

At first I thought I had written some bad code that made it crash on that one specific template where it first happened.

But then I tried to create other test templates, and the same issue happened.

Then I tried to create a new template, using code from an older template since they could still be edited. Copy pasted that code and saved the new template. If that new one could be edited when using the old templates code, then it would be something wrong with the code on the new template after all.

But no. That one didn't work either. That one also got stuck at loading.

I did also try to create templates with just simple text, no code or anything, and that did work.

But as soon as I add ANY sort of code, from simple, to complex, even code that has worked perfectly in other templates before.. it breaks down.

So I'm 100% unable to edit my templates right now. I need to get them just perfectly correct on the first try, otherwise I have to entirely delete the template and create a new one. Which is pretty bad, and very un-efficient.

Has anyone else noticed the same issue? And have any idea what's going on here?

Could it be something server wide with Fandom perhaps? Since it seem to happen with all new templates no matter how they are written?

Or is there anything else going on here?

I understand it defeats the whole purpose of a wiki, but I really don't want my wiki to be edited by anyone, due to many people already changing things they don't know about. I want to make it so that only me and my admins can edit the wiki, I already contacted support for them to turn on Protect Site yesterday but they are taking too long.

I don't want anybody to make any pages, or edit anything. I am making a wiki about a story I'm making and people are just barging and and making fan characters on it.

If there are any grammatical errors I make on the wiki, I will leave my admins to fix it.

The purpose of my wiki is to inform people on the story and for them to see characters that I've made, basically just a showcase.

Please someone help me and tell me how I can tell everyone but me and my admins from editing my wiki.

How do i revert edits?

Hello! I'm new to the Fandom community. I'm here from a Google search, curious about a villain, specifically Yuri Gurka from the TV series Fargo. I noticed the grammar and punctuation are a bit off putting; for example periods are placed only at the end of each paragraph. I made an account in an attempt to edit it, but it seems I don't have permission. I know it's something small, but that also makes it something easy to fix. It would be great if someone could clean it up or if a moderator would allow me to do so, so that no one else needs to sped their time on it.

Hello everyone! I am trying to find out how to add a flagicon to the nationality of my character in the infobox in my wiki? For example, like they do in the Marvel Cinematic Universe wiki next to the citizenship or nationality of the characters. Here is an example from the page about Scarlet Witch: https://marvelcinematicuniverse.fandom.com/wiki/Scarlet_Witch

I am also finding it hard to edit my infobox, as when I add more categories they don't appear when I save it, and I also don't know how to add an image to it. I would really appreciate some help and advice. Thank you in advance!

Hello, while I was given admin status some years back for maintenance purposes on the UTAU Wiki I have tried to come up with a layout and template that would be simple for newer editors to follow. However, I haven't been editing much on wikis I have tools for. Cause I am working on my primary wiki. So instead the UTAU Wiki has fallen back into a bit of disorderly editing.

There are users with some editing experience that have created personal infobox templates and layouts. This has resulted in just (what I can see) a confusing mess of what the pages are suppose to look like.

So my question is as titled.

Sometimes whenever I edit, I get this message: "You are not allowed to execute the action you have requested." Why is this appearing? Am I using some sort of VPN?

I wanted to make an edit on the Roblox cleaning simulator wiki, specifically the named cassettes table. I wanted to extend the table for more cells, or transfer the cells if possible. I tried to do that and all it said was delete or merge. There was also properties but I looked there and there was no extend table. Could one of you help me? My post for help in cleaning simulator wiki is here: https://robloxcleaningsimulator.fandom.com/f/p/4400000000000053350

Question: | FandomHow do I extend a table? I'm trying to extend the…robloxcleaningsimulator.fandom.com

For the original usage, see Anthem's Cortex Entry: A CRY FOR HELP page. I've already changed a bit on Dark Devotion's version of the Cortex template (now called "Codex") after exporting, so the changes will be listed at the bottom just in case someone gets confused. 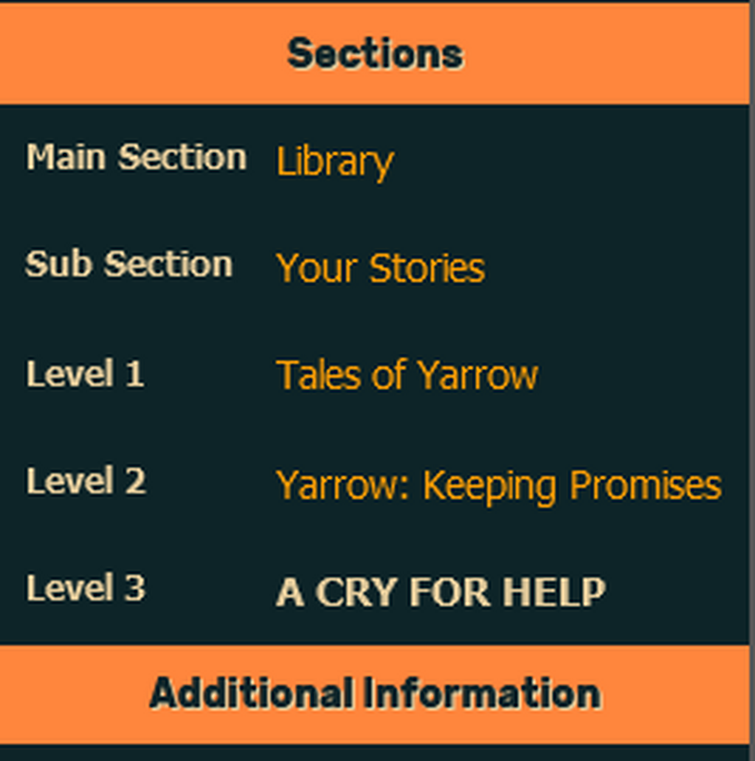 One of my remaining steps in repurposing Anthem's Cortex templates is to add a Level 4 named "Room Name" within the new Codex template. The stuff going on in level2 ("area") and level3's ("room") lines are causing me hesitation to just mimic level3's.

Here's what I was told to do: "The level4 is something you can add in the template page just like the other levels. You will first have to add it in the infobox of the template like I mentioned earlier."

Would this really be fine for the Codex's change? I'm honestly not even sure what's going on here.

I see no reason why this wouldn't work for the Infobox-Codex's change: