The Fandom/Gamepedia server is governed by the rules of Fandom as a platform and consequences for actions on Fandom/Gamepedia will carry weight on the server and vice versa. Joining Register your account on Discord. It is recommended to download the Discord client for the device you are on., Use...

Pls tell meh how to add discord on mah wiki on like u see it on lke the side while u scrolli and u see that thing for discord just pls tell me how to add that!

This is the text I have written before and was going to send it to this administrator called Kiwismurf I contacted him on discord and he was being rude and would ignore/seen my messages I had to be on the wikia discord server to even contact him the other day I was kicked/banned on his discord server for no reason I didn't break any rules I never even spoke to be honest also a few words got editen because I think I wrote everything on January 2nd.

I don't know who is the main owner on this website but the other two administrators Camilo Flores and Noirlime4L abused their powers on me and now I got blocked banned I don't know what. This is not the first time it happened though I was abused by staff that has now resigned back in 2014.

Your username or IP address has been blocked.

The block was made by Noirlime4L. The reason given is Spamming links to external sites.

You can contact Noirlime4L or another administrator to discuss the block. Your current IP address is 178.58.225.36, and the block ID is #10312. Please include all above details in any queries you make. 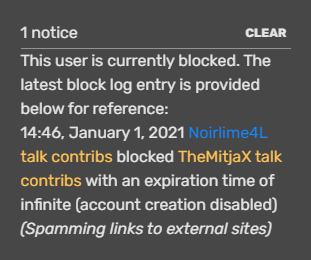 So let me clear something up there was no spamming I was editing the wiki's trivia sections (mostly) very slowly. The external links were youtube links of all things which would prove the things I added in specific page.

This is an example I don't know how to explain it

They're a little trivia facts I like recording altough the video is old but is real because that youtube channel is mine and anyone can attempt these things if they don't believe me. There was no cheats/mods used in any of the video links I uploaded on gtawiki I remember back in 2014 I had this discussing with some staff and they said they don't allow cheats/mods except few exceptions like DYOM which never appear in my videos. Anyway whenever I do a gta video there is a description which says how to get to the result in the video and cheats/mods if they were used.

Okay now I went under my talk page on gtawiki and I'll continue.

People made changes before to my edits but never removed my youtube links there was no false info people need to try it for themselves if they don't believe it because I don't upload fake crap on youtube like clickbait thumbnails + mods/cheats saying they're not mods/cheats whenever a mod/cheat is used It is said so in description and sometimes in the name of the video.

»Honestly I will suggest do not trust any videos on YouTube for the GTA series unless they are about missions. The reason I say this is because on YouTube, you can find lots of users who use mods, or even hack the game files, making some things appear to be different than in the real game. So next time, if you see a video of something strange in a GTA game, it is reccommended to not add it to the wiki without at least speaking to a staff member about it. Also, don't add the links to YouTube videos here before you talk to a staff member because there is a possibility the YouTube video is not correct. () 15:59, July 18, 2014 (UTC)Smashbro8«

The problem here is that they're my videos and they're about missions and the stuff is real if someone wants to attempt any of my GTA stuff they need to use PC version of GTA 3 1.0 or GTA 3 1.1 for GTA SA I would need to look into it but yes it's also PC version. Anyway these weird things happen everytime or is a high chance for them to happen at least.

Oh I thought they were taken from another user on YouTube. My opinion is if you see something strange on your GTA don't add it to the wiki without notifying a staff member, as it may just be a small glitch at the moment. For example, if your screen started messing up on your GTA game, it wouldn't be wise to add that to the wiki, as that's just a minor error. Do you understand where I am coming from? () 17:26, July 18, 2014 (UTC)Smashbro8

My suggestion here is to have a staff member which approves links or you guys change the edits to pending so staff needs to approve it manually. A staff member that has every save file for every game and can attempt a certain mission so they can get the same result I get in my videos. Just look at https://gta.fandom.com/wiki/User_talk:TheMitjaX

Also the warnings I got were all from 2014 and now It's 2021 I'm pretty sure that's very unfair to get banned/blocked and I'm not even talking about the abusive administrators who kept undoing my hardwork yesterday (1st january) so I would like some changes made to this wikia, staff and my unban.

This my youtube https://www.youtube.com/channel/UClfnMqjuhn4hhyniUyM5S-g I know I posted a wiki page before with it in it anyway I still upload these trivia things to youtube but I'm only doing it with GTA SA right now.

Anway I just noticed user named NalexandruN did a lot of »fast« edits and none of his stuff was reversed that's unfair and he did changes more quickly than I did.

I forgot for the fact most of these trivia came from this wiki and it was written in wiki but they deleted it someday and so basically what I post back is the info that was once on the wiki + video proof they delete not just my video but the text also I kinda don't see any reason in this there is a lot of sentences without proof not by me on the wiki (I post proof) and they aren't deleted but mine are not just the video for some reason but the text also.

Now for the fun part there are also my videos on this wikia (altough barely) on this wikia and by other people so tell me what's the difference between 2014/2016 video posting whatever unimportant year they were posted and now 2021? Or did somebody actually test them like they should do it with all youtube gta videos that land on this wikia.

I just noticed a lot of other users do multiple edits in a row (faster than me) and none of their edits get reversed or even edited which I find very unfair. Sorry for long ass text I can't think of nothing else to say so that's it I hope I get unban/unblock whatever and I can continue posting youtube videos on gtawiki because they are 100% real also I forgot to mention I just started partnership with youtube and it was mainly this what gave me idea to post trivia and youtube links to gta wiki.

I also noticed most of the stuff I edited yesterday (january 1st) got reversed but 2 edits didn't even get touched soo you guys actually tried those or are they very known? I'm scared to tell you which ones they are because you are just gonna remove them L. I couldn't contact on wikia because of the ban block thing but I don't know where else to appeal.

So I'm able to figure out how to link social media accounts but I'm still stupid for not being able to add my discord server for my wiki, how do I add discord widget? thanks in advance!

Discuss Everything About Star Wars Movies and TV Wiki | Fandomstar-wars-movies-and-tv.fandom.com

Recently my wiki was been moved to the updated model for editing. Originally it had the basic Visual Editor like this:

My problem with the new visual editor is it doesn't give an actual visual representation of what my page will actually look like. It's very clunky and it splays out all the info, unlike the previous model which showed me what the actual page would look like.

Here's what the Visual Editor has been changed to

I'm no web designer, but the fact that the page is now so unrealistic and just hard to edit with is annoying. I'm not trying to get you guys to change anything of course, but is there any way I can use the previous visual editor for my own wiki when I edit?

How do i get a discord bot to feed the discussion and editing feed into the server?

I've implemented our discord server's widget into the wiki and since it's on the front back and looks odd when put on the side, I'd like to center it.

I have no idea how to do that and tutorials that pop up are for images, which don't really help with the DiscordIntergrator very much, so I'd like to ask for help from the community on this one :)

I am seeing a lot of Wikia related discord servers using https://dev.fandom.com/wiki/VerifyUser

Is this necessary to do this

Hey guys~ I'd like to move the DiscordChat module to be below the Join the Discussions module on my wiki's sidebar. How could I do that? https://yourturntodie.fandom.com/wiki/Kimi_ga_Shine:_Tasuketsu_Death_Game

I am currently facing a template loop problem on a wiki, which I am a bureaucrat on.

When I created it, it said: "Template loop detected: DiscordIntegrator"

However, when I created the same template on another wiki that I own, there was not a similar problem.

Why can I no longer provide a description for an added image when I upload it? This includes crediting the artist who created the image and adding a link to that artist’s website. This is crucial for the artists themselves! I cannot believe that Fandom deleted this! Have you no interest in admin abilities to credit the artists who are creating imagery for individual books, literary series, etc.? This is preposterous! Every artist deserves proper recognition! Fix this!

So I throwed away AOTD and ornate zombie sword, Runaan's bow to 'ground' and they just disappeared

those cost over 6mil, but it just disapeared

I EVEN SOLD 3 SUMMONING EYES WITH THEM

if u want to say something to me, I have discord account

(edited by A Fandom user)
Discord

So, I just tried to access the Discord servers for both Community Central and The Last of Us wiki, and it won't load. When it does, it says something to the effect of "Server not found". Is this some sort of glitch or malfunction?