Community Central
Start a Wiki
ALL POSTS
This post is locked.

This Release Highlights post is early this week because we're only doing one Unified Community Platform release during the shortened holiday week.

As mentioned in this blog, our team investigated the functionality of the 2010 Wikieditor, which no longer receives active development from the Wikimedia Foundation, to see if it could be built into or onto the actively developed 2017 Editor. The most significant bit of that functionality was the CodeEditor. I am happy to announce that, as of this release, the CodeEditor functionality has been deployed onto the 2017 Editor.

That was a major blocker for custom CSS on your wikis. The rights issue has been hotfixed and local admins are now able to edit the CSS on your UCP wikis. Additionally, personal CSS is available through UCP.fandom.com for users who like having global personal CSS. Custom JS remains blocked, as we need to recreate the Content Review system on the Unified Community Platform.

The MSUpload extension has been recreated on the 2017 Editor, listed as Mass Upload with the universal upload button, allowing you to upload multiple files in one swoop. The Mass Upload feature also allows drag and drop selection of files to upload. 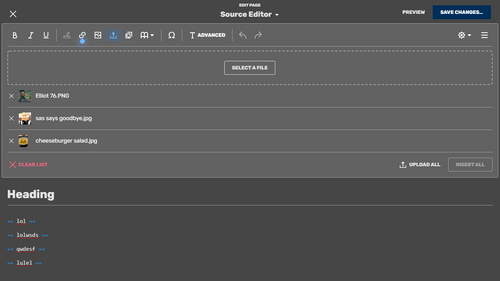 A bug with interwiki transcluding was corrected on the UCP, allowing its use. Bug has been reopened, due to issues presented upon release.

When wikis overlaps are detected in the Create New Wiki process, the displayed wikis will now indicate if one is an Official Wiki community, letting users know that there is an established relationship between the wiki community and the entity making the associated content.

The rest of this release focused on minor bugs and preparation for other feature releases.

One of the bugs we've gotten a lot of questions about is the image transparency bug, in which images with transparent backgrounds are displaying with white backgrounds on UCP wikis. A fix is expected soon.

To focus the feedback flow and make it easier for us to process all the awesome stuff you're sending in, only the most recent Release Highlights will be open as a thread for replies. When we have a new one, the last one will get closed. Cheers!

Himmalerin wrote: Clarification, I meant triple-click to select the line of text, not double click....

Again, I really think this is an issue with the copying, not the pasting. I tried pasting into MS Word instead of the wiki editor and got the same issue. If it were an issue with the wiki editor, then MS Word shouldn't have been impacted. Also, ever since Special:Analytics come out, copy-pasting the page/file names from the lists into MS Excel results in copying the link, not just the text. So I think there is plenty of precedence to say that this could very well just be a matter of what is copied.

I made a wiki, and since I made it a couple of days ago, it has the new wiki format. I’m not that good with coding/editing and such, and visual editor was nice and easy for me. Is there anyway we can use that on the new wikis? When I went to edit something, I’m still learning how to input pictures, make text bold, etc. Visual editor is much nicer to me then this new way of editing.

The visual editor is available on UCP, are you experiencing issues where it isn't available?

Yea, I either can’t seem to find it/it’s not there, or I’m not sure how to access it. Again, sorry for the troubles.

Please give a link to the wiki.

There is a visual editor on UCP wikis, but it is different from the one on legacy wikis and may be missing features. There really isn't a solution except waiting and hoping. This is the situation FANDOM has given you.

Ok, here is the link. The visual editor does not appear on anything when I edit. https://splat-hub.fandom.com/wiki/Splat_Hub_Wiki

Here is the link to anime movie. Everything about that new wiki doesn't work better for me like Animangafooter which that wiki need. https://nakineko.fandom.com/wiki/Main_Page

Semantic MediaWiki works passably on Familypedia, along with Semantic Forms (the predecessor to Page Forms). They are essential to most of the quarter-million articles. I trust that the eventual upgrade to MediaWiki version whatever will allow those to be upgraded as well. Not recommended for new wikis unless you have some really keen editors because there is a lot of learning involved, but as they work on Familypedia there should be no more difficulty for Fandom staff if other wikis are allowed to have them.

Robin Patterson wrote: Semantic MediaWiki works passably on Familypedia, along with Semantic Forms (the predecessor to Page Forms). They are essential to most of the quarter-million articles. I trust that the eventual upgrade to MediaWiki version whatever will allow those to be upgraded as well. Not recommended for new wikis unless you have some really keen editors because there is a lot of learning involved, but as they work on Familypedia there should be no more difficulty for Fandom staff if other wikis are allowed to have them.

We are committed to bringing Semantic MediaWiki and Cargo onto the UCP for the wikis on Fandom and Gamepedia which currently use them. We are not changing out position on access to SMW for further wikis at this time.