I have a wiki where I use nuvola icons for interfaces.

This is how MediaWiki:Blockedtext should come out when someone tries to edit. 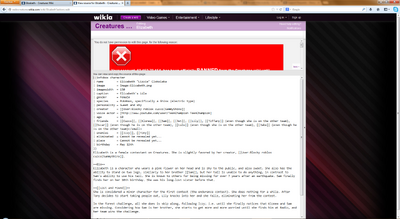 This is ridiculous. Also, it automatically takes me to the log in page, which is useless. Is there a way people can view my wiki correctly? Maybe it should be fixed to MonoBook.

Blocky roblox cuzco wrote: Also, why is there a glitch where forum/message wall posts seem like they are psoted one hour before their actual creation?

if you are referring to the wiki time stamp, they arnt. Wikia is probably using a different time zone compared to you

(edited by Echoblast53)
0
This post appears to be posted one hour earlier to me. Why?
(edited by Blocky roblox cuzco)
0

Check your Special:Preferences. If the issue continues, try opening a new thread, because it is unrelated to this topic.

I think it has something to do with Daylight's Savings Time. I set it to -6:00, it doesn't seem to have luck yet.

Given the fact that you're confused over an hour's difference, it sounds like you are British, or in a time zone that recently switched over to BST. Times on Wikia wikis are pegged to UTC, not British civil time. During the winter, there's no difference between the two time zones, so you probably got used to Wikia time being your local time. That is now no longer the case.

Alternately, you may not be in Britain, but may have been under the impression that your timezone was London±<x hours>, since that time is frequently given relative to cities. This is not really the case on Wikia. Instead, the offset is from UTC.

It's particularly confusing around this time of year, because of the difference between the end of US and European Daylight Savings periods. However, if you just learn to forget about "British time" altogether, and go with UTC, you'll never be confused about what time it is in Wikia land.

The time matches, but the posts still have a glitch. Anyway, how do I make this so the message shows up correctly?

(edited by Blocky roblox cuzco)
0
Not sure what you mean. I'm not seeing a glitch. It was 22:48 UTC when you posted.
(edited by CzechOut)
0

Perhaps if you took a screenshot of the post where you left your signature, we could see what you're seeing. Cause it looks fine on this end.

(edited by CzechOut)
0
Blocky roblox cuzco wrote:
BTW, can you help me fight vandalism on that wiki? User:ZeroZeroThirteen is a long term vandal. And can you disable his account when I request it? I think I can tolerate him a little longer before doing it.