Is this a bug or something, it's annoying. And I really need someone to immediately answer this thread. 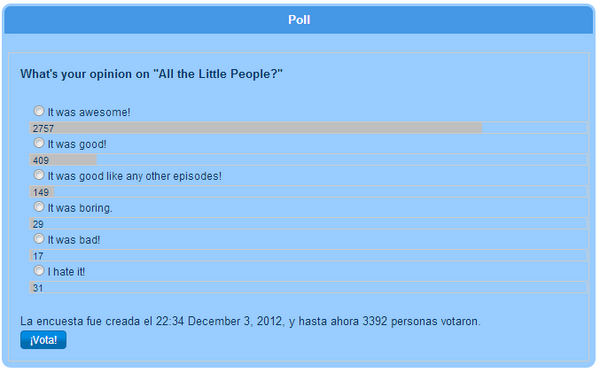 Report it via Special:Contact. This is a known issue that has randomly affected system messages for months now. I don't think Staff have quite figured out how to fix it yet.

Try to purge the page. That should clear the message cache and revert everything to English.

Peceos, Thanks! Much more better than that Special:Contact, like sometimes it doesn't help at all.

Blugo34 wrote: Peceos, Thanks! Much more better than that Special:Contact, like sometimes it doesn't help at all.

Blugo, you should still report the bug. Staff need to know these things so they can actually do something about it. By avoiding Special:Contact, how do you expect them to fix stuff?

I have tried and tried, but I recieve messages that actually don't help. Sometimes they do, but rarely.

Totally agree with Eladkse! They cannot fix issues they aren't notified of!

It's a very simple principle:

If you don't report something, it won't get fixed.

So when you find a bug, even if another user helps you resolve it, it's always good to report it to Staff so they can look at it.

I find how staff reacts to bug reports, depends on the quality of the bug report. Keep in mind: They have to re-create the bug before they can fix it. They need to see the issue with their own eyes to get a chance to figure out its cause. The more details you add to your report the better their chances to do that.

In this particular case e.g. I would go hunting around your wiki a little to find out if any of your users are Spanish and if so, what their last edits were. Their actions may have had unintended - probably even unnoticed - consequences.

You might want to do a bit of other research as well, if you can think of something Spanish going on. The best bug reports are the ones that are 100% reproduceable. So the more you deliver in a bug report, the more you'll get back.

You've already gone a lot of the way here by delivering a picture. Screenshots are so important when dealing with staff. They more or less prove the bug exists.

Now, of course, not every bug can be demonstrated with a screenshot. Sometimes the bug has something to do with a process. And that's where being able to reproduce the bug is important. But it can take some time to convince staff that it is replicable. I know one time I spent something like a week of multiple emails a day trying to demonstrate a bug. And there was plenty of good will on the part of Staff, but they just couldn't see it, mainly because my powers of communicating this particular bug were poor. But eventually we got there.

Another suggestion I made took about 6 months from the time I opened the case until it was finally implemented, and periodically I had to explain what needed to be changed and why.

And you you honestly never know what your bug report might lead to. I reported one thing recently about the way the mobile skin worked at w:c:tardis, and it led to the discovery of what the Mobile team called a pretty major exploit that needed to be closed. This exploit wasn't what I had written in for, but if I hadn't submitted the report, they wouldn't have found an entirely separate bug.

As long as you're being polite and trying you best to communicate a problem, you should never give up with Staff. Most of the time, they respond in 48 hours and resolve your issue. I've often gotten same day resolution — but that, of course, is not what they promise. (I can't even call same-day service exceptional, but it's not what you can reasonably expect.) On other occasions, it's taken longer for me to effectively communicate the problem, them to comprehend it, and then for the Engineering department to actually make the change.

Remember, we're Wikia's unpaid beta testers. They have a vested interest in having us catch their bugs. So don't be afraid to (politely) stay on the mound and keep pitchin' until you get a strike.